Welcome to my musings on my model railroading hobby.  I’ve been in love with trains since as far back as i can remember, thanks largely to my Grandfather and trips to Scotland as a youngster.  Some of my favourite memories are of going to Lenzie Station to watch trains in the evening, and begging for us to take a day and go to the Bo’Ness and Kinneil Railway (we did!!).  As can be seen below, even at 9 years old, a Class 47 was far more interesting than posing for pictures with my sister during our summer vacation!

My first layout was as traditional as you could get, a “plywood pacific” 4’x8′ special with two loops of track, and initially no switches or sidings!!  Over the years, this layout moved with me from Chatham Ontario, to Halifax Nova Scotia (well, Cole Harbour), and back to Waterloo Ontario, before it finally met its maker in 2000 with me at University, and my parents downsizing and moving to Georgetown Ontario.  The layout grew and evloved over its life, eventually getting an L-shaped leg with some sidings and various on-route industries and buildings on the two main loops.

From humble beginnings and hobby would grow, Chatham Ontario Circa 1989 (i miss that Chessie System GP unit, i have no idea what brand it was, probably Tyco, some day i’ll need to buy another!!)

This layout provided many many hours of running trains (i.e. having two trains running in circles), no operations, no nothing, just the simple joy of watching my trains run.  In many ways, i miss it greatly, more than any prototype based or operations based layout i want to build, as just the simple pleasure of watching my models run is something i don’t get to enjoy living in an apartment now.

The Plywood Pacific Circa 1995 in Waterloo before growing an L-shaped leg along the far wall, during my basement troll period living in my parents basement!

After a brief break in modelling during the completion of a Bachelor of Environmental Studies degree at the University of Waterloo, after graduation, I moved into my parents new house in Georgetown Ontario for a couple of years while i found work (huzzah) and paid down student debts (boo) until i was able to afford to rent in Toronto.  During the couple of years (2003-2005) living in Georgetown, i managed to convince my parents to let me take over a wall in our basement rec room, and build a shelf switching layout on a 2′ wide shelf.

The Georgetown basement before dismantling in late 2015, note i have an issue with acquiring things that just get to be on display!

This layout kept me busy, and taught me a lot, especially that i don’t know anything (or at least didn’t in 2003) about track planning and operations.  I learned a lot though about scenery, and building/kitbashing structures, doing scenery and many other things that will serve me well when the day comes that i do build a new full layout.  But, as with the plywood pacific, this layout too would meet its maker in September 2015, in advance of my parents downsizing their house, a group of friends came and helped with the painful part of this hobby, dismembering a layout and packing it up.  While the shelf is gone, the structures live on in storage to become a part of a future layout.

Apartment living in Toronto means making compromises and being creative with space, for a long time after moving into the City, the best i could do was work on things at weekends when i went back out to my parents, though i eventually figured out how to work with an easy to take out and take down setup in the apartment i shared with some friends.  By the end, i’d even started to build a small shelf layout, designed to fit on top of an Ikea wall shelf unit. 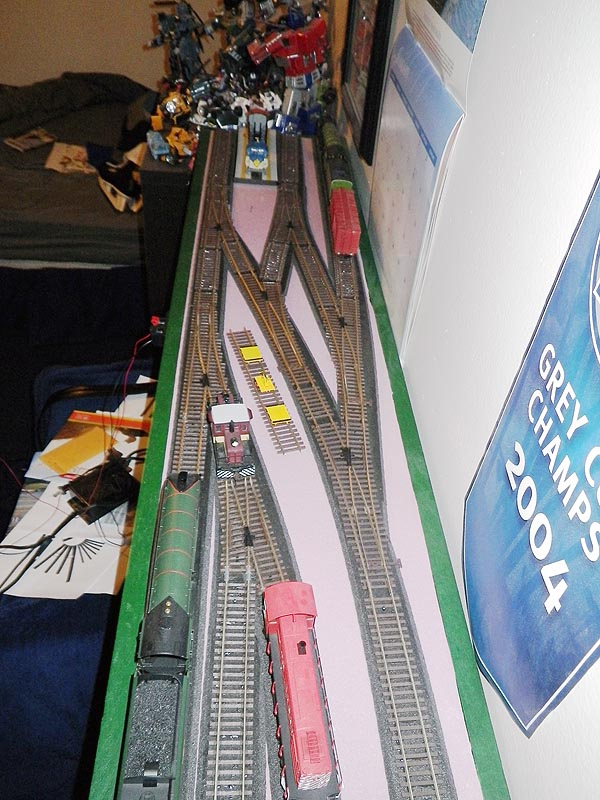 The apartment shelf layout begins to take shape in my old “guys” apartment, a shared 3 bedroom with two other friends.

The Ikea shelf layout did however, lead to a revelation, that living in apartments, the ikea bookcases we have are the perfect size for vignette dioramas of different things, which give me a place to display models.  So far, i’ve built three, two related to my volunteering at the Toronto Railway Museum, and one of a London Underground Vignette of a Metropolitan Railway Station to display equipment on. 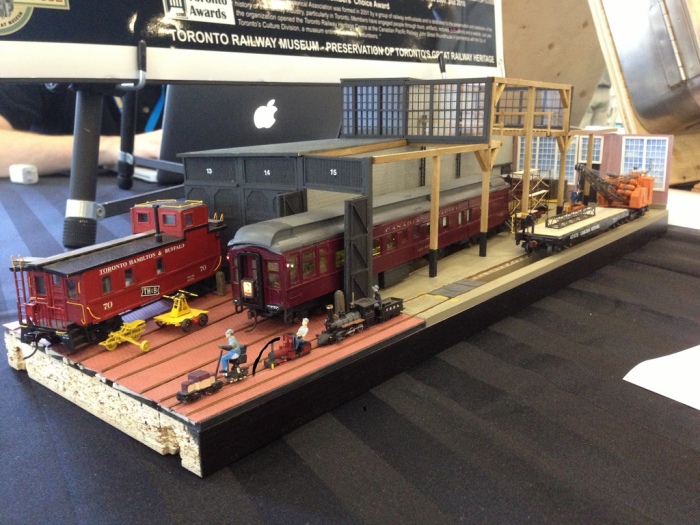 As you can see, a simple 22″ wide Ikea shelf can offer a lot of possabilities, and when done right, you can even sneak them into your living room as a place to display trains, rather than hide them away in your basement!!

Sometime around 2012, i discovered that something i learned at University was actually useful for my hobby.  In the design studio courses, we learned a 3D modelling program called FormZ.  We used it for creating 3D models of buildings and neighbourhoods for deisgn studio, but i discovered that using the 3D modelling skills, i could create 3D printed parts through online providers like Shapeways, and create new models that weren’t available and parts for custom projects.  Over the past few years, my modelling skills have improved, and i’ve gone from relatively simple pieces, to designing full railway cars and structures, but the details of that are something for a future post (see what i did there, motivation to write something else, and for you to come back!)

I’m taking these baby steps into the blogging world and going to try and post regularly (hopefully), semi-regularly (more likely), or at all (hopefully this isn’t a one and done!) to document what i’m working on, what i’ve done, things i’m doing or shows i’ve been too.  In the past couple of years, i’ve finally become a part of the “social” side of this wonderful hobby, meeting great new people, making friends, learning new techniques and ideas, and opening up instead of being closeted and a lone wolf modeller.  Friends and skilled modellers who blog like Trevor Marshall, Ryan Mendell, and Pierre Oliver to name but a few (check the blogroll on the side for many more excellent and inspiring modellers) have inspired me with their great work to both meet others, and to start writing.

Long term, i”ll hopefully progress into layout planning, and looking at building a layout as i continue on researching the line i’d like to model in a perfect world, being the Canadian National Railway’s Milton Subdivision from Georgetown to Allandale Ontario in the 1950’s.

Thanks for reading, i hope you enjoy!!

Fergie keeping an eye on projects on the workbench, i hope you’ll keep an eye on my blog and my projects and find them interesting.

3 thoughts on “Welcome to my Hobby”