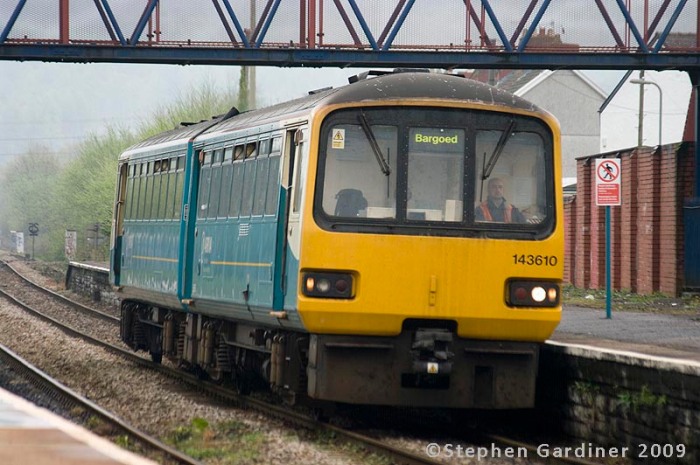 A much unloved solution to lightly travelled lines in the United Kingdom, a two car Class 143 “nodding donkey” works the Rhymney branch of the Valley Lines in southern Wales with a Cardiff Central-Bargoed train as it passes through Caerphilly Station. 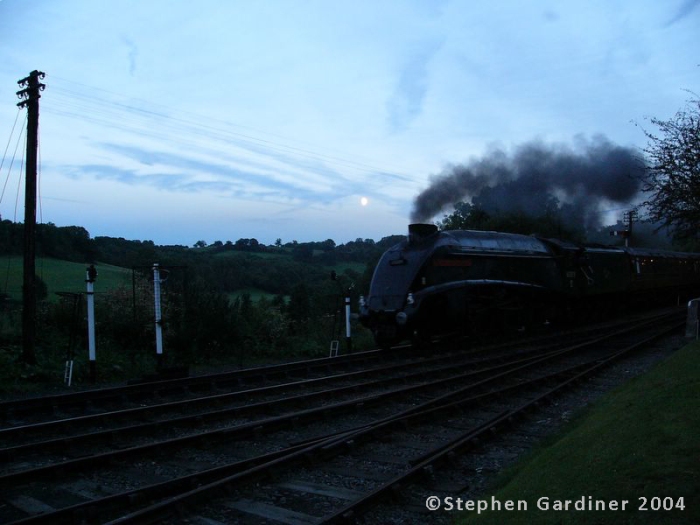 Streak at Dusk.  In the gloom of a late September Friday during the 2004 Severn Valley Railway Autumn Steam Gala, BR(LNER) A4 Pacific Union of South Africa approaches Highley Station.  In the dark you can almost imagine its going at speed, rather than gently slowing from a sedate 25mph to the station stop.

So I wrote a couple of weeks back about how the 3D print of QTTX 131344 was no longer flat, and was decidedly bowed.  I received a couple of very good suggestions on ways to fix the problem.  Some from Rick De Candido will lead to a re-design of the 3D print to make provision for inserting brass bar strengtheners to help keep the car flat, something I can try on a re-print in the future.

The second suggestion from Steve Hunter, a fellow 3D designer and someone who is experienced in dealing with Shapeways materials lead to what appears to be a successful quick fix.  Effectively, using my wife’s hair dryer while she wasn’t home, I tempered the car to allow it to be bent back into the shape I want, and when it cooled, it should in theory hold the new shape.  Its been a bit over 24 hours since I tempered the car, and so far so good.  The next test will be to re-install the weights to give the car tracking ability, and see if the car continues to hold it shape as it should, or if the weight in the centre is causing the sag regardless of the tempering, which would indicate the bigger problem is an overall weakness in the design despite the material properties of the 3D printed UV Cured resin Shapeways markets as FUD.

Tempering the flatcar print with a hair dryer.  The car is clamped at the centre to a nice flat piece of wood.

As Steve pointed out in his comment, with Shapeways FUD/FXD, you could also achieve this with lukewarm water, but with the car painted and decaled, I didn’t want to take this approach and risk removing decals, even with the car clear coated.

Before and after of the car, the noticeable arch in the car is now gone, hopefully for good.

This kind of outcome where the minds and knowledge of others can be sought out and applied to both help me and anyone else who stumbles upon my blog is what I’d hoped for when I started writing.  Two great suggestions have lead to a design change that will hopefully help others down the road, but also to a simple fix (hopefully) for the car already printed that i am working on.  It will also eventually help anyone else who wants this car when I do put it up for sale on Shapeways, as I’ll be able to give them good directions on how to finish their car and make sure it runs properly.

Night train at Allandale Waterfront…or early morning train.  A rare trip on the GO from Barrie to work in March 2016 when i had to be in Barrie on a weeknight but be at work in Toronto in the morning.

Very rarely will I stray from trains, but today I need to.  Last night, in two very different, but very personal ways, I was reminded of how short life is, and how much Cancer sucks.

One is a family member battling cancer, who we got some bad news about their condition worsening literally as we were leaving dinner to go to the Air Canada Centre and see The Tragically Hip, one of my all-time favourite bands.  As you may know, Gord Downie, the lead singer of The Tragically Hip announced earlier this year that he has inoperable brain cancer.  That means that their current tour is potentially their last.  Hopefully not, but that possibility is out there.  We were lucky to get tickets after a lengthy search, and wound up getting ridiculously close seats to the stage to say what may be our goodbye to a person we’ve never met, but whose art has moved us and given us pleasure for close to 30 years.

Despite everything else going on around us, we managed to enjoy the show, but it’s yet another reminder, be kind to each other, or as the esteemable Wil Wheaton would say, “Don’t be a dick”. We don’t have a lot of time, appreciate those you love and care for. 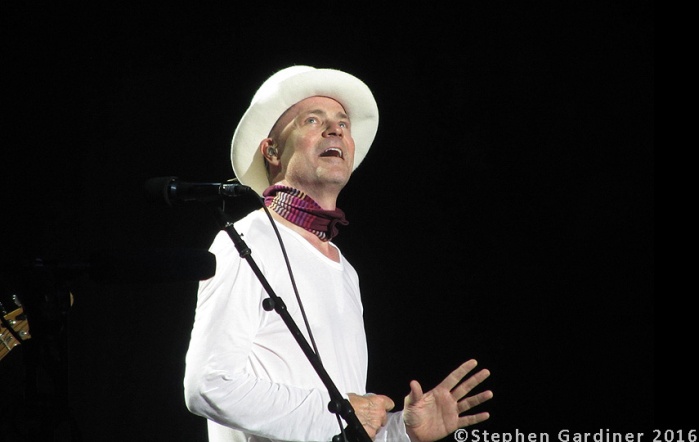 This post is my introduction to the railroad line I would like to someday build a layout of.  Over the years, as I’ve gotten back into the hobby following a brief interruption for University (compared to many, I’ve never fully left it), I’ve become more of a “Prototype Modeller”, looking to accurately model a line and its operations.  While I have never built a prototype layout, in recent years, I’ve been focusing my attention on becoming better at obtaining information about real places or equipment, and replicating them in model form.  Most of this has been focused on models of the physical buildings and equipment in the Toronto Railway Museum collection.  This has been a good sideline as they are models I have space for in our apartment, and are readily accessible to me to take measurements, photographs, and compare my models to the real thing.

How people decide what they want to model in our hobby could be a whole series of blog posts, so I’ll try to keep this as short and manageable as possible!!

I grew up in Chatham Ontario.  My exposure to trains as a kid was Chessie System Yellow/Orange/Blue Geeps hauling chemical cars on the other side of the field behind our house, seeing CPR freights running through downtown when we were at the mall (the tracks were right beside our church and the Miracle Mart my mom shopped at, both tolerable trips if a train came by), and going to the south end to see VIA Rail passenger and CN freight trains when visiting family friends on the other side of town.  Any of these would be things you might expect to attract my modelling interest as they are things I experienced, but, for some reason, I have always had a strong attraction to steam locomotives and an era well before I came on the scene in the late 1970’s! (at least in terms of North American modelling!)

For a number of years my parents (and me for a couple after university) lived in Georgetown Ontario.  Georgetown is home to a lovely stone station, built in 1856 by the Grand Trunk Railway, and heavily remodelled in 1892 and 1904.  The station remains in use today for both VIA Rail intercity passenger trains, and GO Transit commuter trains.  The station is historically a junction between two lines, the Milton Subdivision which ran from Burlington to Allandale (Barrie), and the Brampton Subdivision which ran from Toronto to Stratford.  These lines met in Georgetown. The area around the station was home to a paper mill, freight shed, coal merchant and a station hotel.  Some of these still exist today (some of the Paper Mill buildings and Station Hotel), others are long gone.  Georgetown in and of itself offers an interesting place to model, but at the end of the day, most of the traffic was passing through.

I was introduced to my now wife in 2010.  Her family is from and still lives in Barrie Ontario.  Barrie was once blessed with two beautiful stations (Barrie proper and the station at Allandale, which yes, wasn’t part of Barrie back then), and a major yard & roundhouse at Allandale.  Only the Allandale Station remains, which has been fully restored by the City, however it is empty, fenced off and tenants for the interior have yet to be identified.  Hopefully, someday people will be able to get into the station again.  Fortunately, trains again run from close to Allandale, the new Barrie-Allandale Waterfront GO Station has opened on the alignment of the line to Meaford and serves commuters heading into Toronto again.  Bill Bradford, an exert on CN Steam and modeller in the Barrie area has built a fantastic model of the Allandale Roundhouse that makes appearances at shows.  It’s incredible to see how big it is just on its own without any of the yard of station facilities.

This combination of family factors drew my interest to the line which connected Georgetown and Barrie.  In the 1950’s, it was an active branch line, not overly busy, but serving several large industries; with a daily passenger service; interchanging with bigger lines on either end; flat crossing and interchange with the Canadian Pacific; an elevated crossing by the CPR; a stretch of parallel running with the CPR; a level crossing with a 4 lane provincial highway (for a few years at least!); and, interesting oddball equipment running on the line.  The line is approximately 60 miles (100km) in length, which is obviously too big to model completely (if my math is right, 60 miles in HO scale is about a 3,600 ft long mainline!!), but the rural nature offers the opportunity to select interesting vignettes or portions of the line to model while bringing it down to a manageable size and something reasonable to operate given the small volume of traffic on the line.

Map of the Milton Subdivision in the 1950’s era.  Produced using Google Maps

On top of all there, there is not one, not two, but three books which spend a great deal of time discussing the history, structures, and operations of this railway.  Two by Ian Wilson, “Steam at Allandale” and “Steam Scenes of Allandale”, and one by Charles Cooper called “Hamilton’s Other Railway“.  These are invaluable sources to start the learning and researching process.  Ian Wilson’s books in particular are invaluable as they focus on the era of the 1950’s which I want to model when big changes were happening on the railway with the oncoming dieselization and increased competition from private cars.

I’d hoped to take some weekends this year and drive/walk the line (large parts of it are now bike/hiking trails) and take pictures, but the rest of life’s demands on my time have scuppered that so far.   I am going to be in Barrie in the coming weeks, so I should finally be able to take some time and detail photograph the restored Allandale Station, having good photographs really helps with the modelling process.

Obviously, living in an apartment, a grand layout that even captures any of this line is just a concept (dream?) at the moment, but it’s good to have goals, I find having something like this keeps me motivated to research and work on projects.  If it never happens, I will build other layouts/modules in the interim as I’ve mulled previously that do fit into my space, but the concept keeps me busy and engaged in research and learning.  After all, I’ve already fully measured and 3D modelled the Georgetown Station and it’s long gone baggage extension, and have the architectural plans in hand to let me start on a model of the Allandale Station, just building these will keep me going for years!