So, I’ve never modelled narrow gauge, I’ve never visited any of the “Great Little Railways of Wales“, though I am member of the 6880 Betton Grange Society based at one of the standard gauge preserved lines in Wales, the Llangollen Railway and have been there for a 5 day visit.  Despite this, I have a burgeoning fascination with narrow gauge railways in the UK, specifically, the Talyllyn Railway which was the first preserved railway in the world.  I’ve also been fascinated with the Lynton and Barnstaple Railway of late, but that’s a totally separate story.

Last year, Bachmann USA who makes Thomas and Friends models for North America announced that they would be expanding into a Narrow Gauge HOn30 line.  HOn30 trains are HO Scale models, that run on N Gauge track, which means commercial track is readily available.  The reason for this, is that one of the Thomas characters is a locomotive called Skarloey, who the Rev. W. Awdry based on the Talyllyn Railways’ locomotive No. 1, “Talyllyn” in his Railway Series of books.  These books are more commonly known now in various guises as Thomas the Tank Engine and Friends, an easy entry into railfanning for kids, with all the locomotives in the original books based on the designs of real locomotives in the United Kingdom. 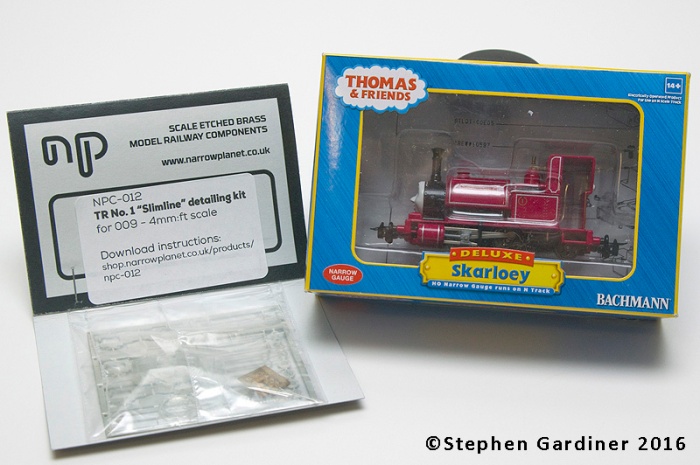 This becomes relevant, because for their model, Bachmann 3D scanned the real Talyllyn on which Skarloey is based, so the Bachmann model becomes an entry point for an “easy” HO/OO Gauge model of the Talyllyn.  For 2017, Bachman has already announced that a second narrow gauge locomotive, Rheneas (Thomas world) or Dolgoch (real world Talyllyn No.2) is coming.  Peco makes 009 Gauge (UK Narrow gauge, also runs on N scale track) wagons, including forthcoming slate wagons that are accurate for the Talyllyn railway.  As such, a conversion of Skarloey to Talyllyn is an attractive proposition.

Someone else takes an interest in the test running of Skarloey before I disassemble it.  Setting up a loop of track on the kitchen table and running trains brings me back to my earliest memories of model trains, and my grandparents kitchen in Scotland with my Grandfather bringing out the trains to entertain us.  Hopefully someday I can do the same for my nieces and nephews when they visit (as opposed to Fergie who kept edging closer to the train the longer she sat and watched)!

I’m certainly not the first or only person to think of this.  The first two runs of the Bachmann Skarloey (a product which can’t legally be sold in the UK because of licensing rights for Thomas products) sold out in a hurry (and from what I can see online, a lot made their way to England as grey market imports).  But I eventually got my hands on one here in Canada. A company in the UK that specializes in narrow gauge, called Narrow Planet sells a kit for doing the conversion, basically saving me the effort of drawing my own 3D printed replacement smokebox door to get rid of the face! 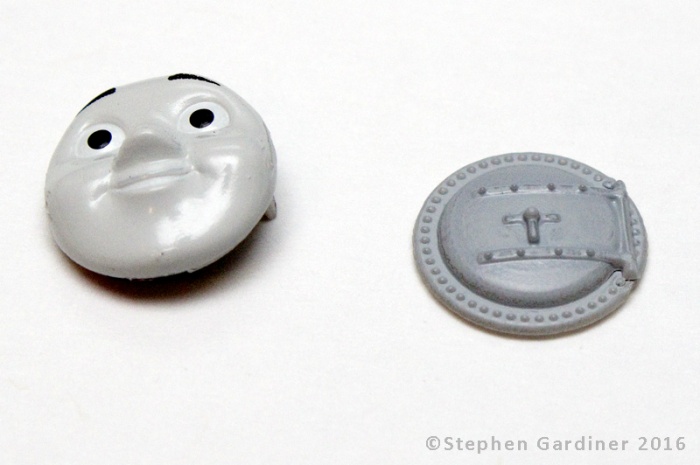 With a few simple improvements, like removing some of the cast on handrails and adding wire ones, an air pump on the smoke box, a representation of the interior of the cab, paint and decals, the locomotive will very quickly look the part.  The Narrow Planet kit includes replacement cylinders and etched motion parts, but I think that is a bit too much of a reach in my skills for me at this point in time, but I’ll have the parts to be able to install them down the road if I want to.  As it is having partially disassembled the locomotive to get the cab and most of the body off, I’m hesitant to go further and risk mucking up the wiring or motion parts even to be able to paint the frame (I’ll have to work up the courage to at some point!).

Even in bright Skarloey red, the locomotive looks better sans face (in my opinion at least!)

With that, I’m ready to start a new adventure.  I’m not sure what I am going to do for display, I’ll probably concoct some sort of diorama/mini layout that fits on an Ikea bookshelf, but that’s a down the road problem.  For now, I’ve got to get back to work prepping and detailing the Bachmann model for re-painting!  I’ve also got to get planning a trip to Wales.  I think its high time I visited some Welsh narrow gauge railways (and we want to visit Cardiff and be Doctor Who geeks for a couple of days as well!!).