Skip to content
HomeCutting Up a Model is Hard to Do

My friends who are not model railroaders always look askance when I tell them I’ve just spent $100 or $200 on a locomotive or car and that the first thing I am going to do is cut it up.  One of my friends is genuinely amazed that someone who can be as frugal as I can be on some things (I’m not going to lie, I stretch as much life out of clothes as i can to avoid having to go to the mall and buy new dress shirts!!), but merrily sit at my desk and slice apart a $200 engine.  It’s just a part of the hobby, it comes with the territory if you like building things and want to model things that are not otherwise available.

Dissassembling Skarloey, a perfectly good model to modify it to something else.  One of the fiddlier dissasemblies as its tiny compared to the HO scale standard gauge models I’m used to.

I introduced my project to modify a Bachmann Thomas & Friends Skarloey to the Talyllyn Railway’s No.1 “Talyllyn” here.  This project at a minimum involves completely disassembling a brand new locomotive, ripping off the Thomas face, and re-painting it.  On top of this, i am making some additional modifications to make a better looking model.  The die-cast body shell has a large flat surface that blocks the cab windows from being open.  I have cut this piece of metal off, and have drawn up a 3D representation of the boiler backhead to go in its place.  It’s not 100% accurate, but at the scale it is going to be, once it is painted and an engineer/fireman figure are shoehorned into the cab, it will look much better than either the blank wall with blocked off windows, or nothing at all.

Shapeways Render of the backhead design for Talyllyn, the locomotive Skarloey is based on.  This will also be tiny when it arrives, which is hopefully next week with an order from Shapeways.

The second big change, is that on every picture i can find, there is coal piled on the left hand side of the cab, but not on the right.  The model has coal on the right hand side, so i’ve been gently filing and cutting away the die-cast pile of coal until i get it flush with the water tank and can then putty in the gaps to create a flat surface.  This is tricky as any mis slip with a file or saw will hack away detail i want on the saddle tank. 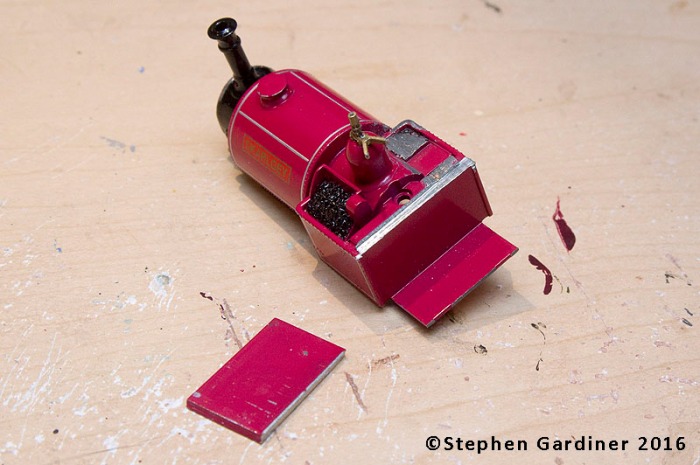 Shot showing the cut off cab interior from the locomotive and the filed down coal pile.

Next step is to get the parts that are painted bright red into the paint stripper so I can remove the paint.  Especially on the plastic lower part of the frame, the paint is a very thick coat and to be able to repaint it, I need to thin that down to make it look a bit better.  More to come as they say on this project.

2 thoughts on “Cutting Up a Model is Hard to Do”