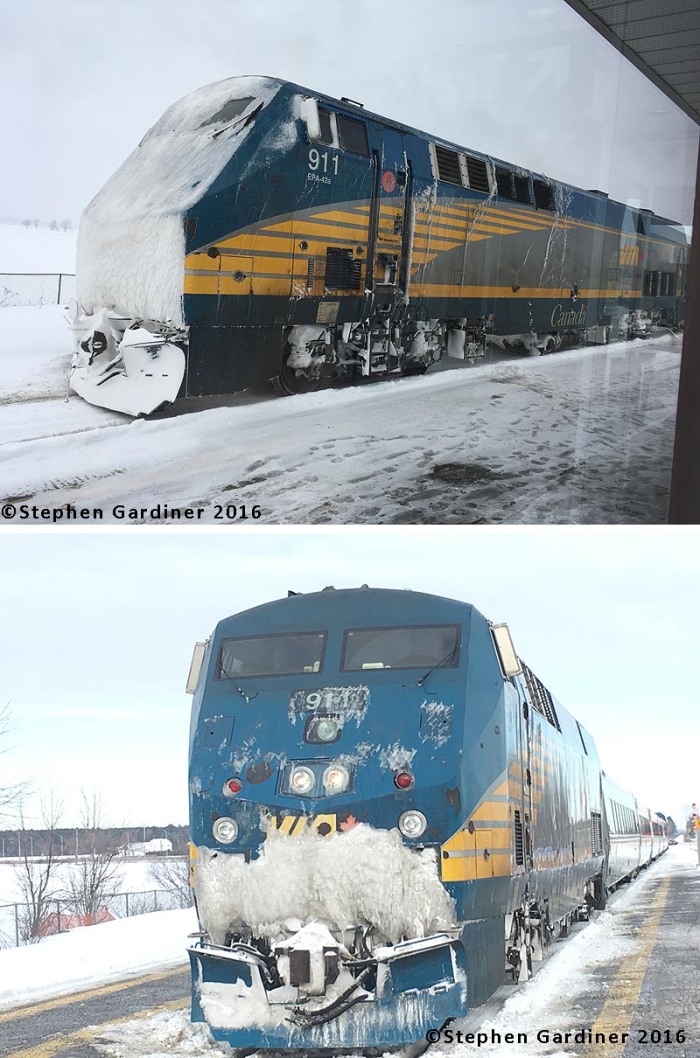 Same Locomotive, Same Coaches, Same Station, two very different days.  Via Rail 911 is at the rear of Train 50 (Toronto-Ottawa) on a very snowy Saturday morning, and showing the effects of the snow being kicked up around her.  In the bottom shot, 911 is leading Train 47 into Fallowfield Station, where we would get on for our return home on Monday afternoon, still with lots of snow and ice, but much clearer looking than on Saturday morning.  Between the top and bottom photos, the train would have returned to Toronto, done another round trip on Sunday, and then back to Ottawa from Toronto Monday morning before the bottom shot was taken.

I hope.  We’re off for a much needed vacation, and I’m trying something different to keep the crazed hairball from strutting across the work bench.  The problem is, in our apartment, the spare bedroom/office is kinda her space, and we don’t want to upset her routine as an old cat any more than it is by us not being home, so we don’t want to close her out of the office, but I also don’t want her batting things about, and we’ve been trying to break the habbit of climbing on or using the workbench as a pass through to the window.  We shall see.

A Cat Proofed Workbench…wrapped in a spare sheet.  I hope.

Merry Christmas!! Ok, i’m a few days early, but so was Santa as he’s riding the rails at the Halton County Radial Railway Museum for their holiday evening trains in 2009!!  All the best to those who read along whatever you celebrate.  I hope that you get to spend time with those you love and care for. 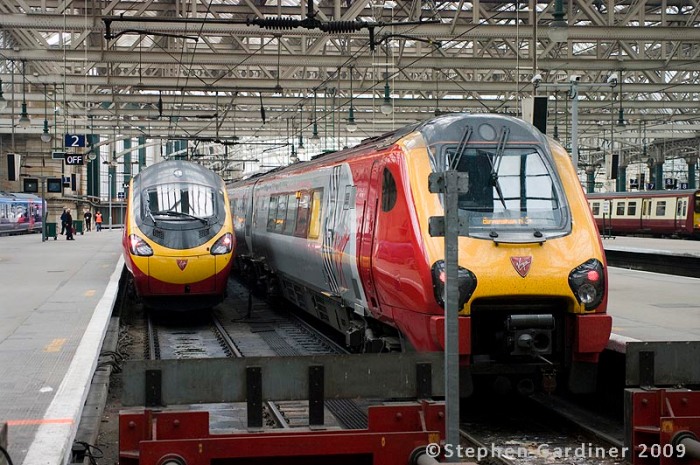 Virgin Trains at Glasgow Central in 2009.  A Pendolino west coast electric set sits on Platform 2, with a Voyager (i can’t tell if its a Class 220 or 221) diesel multiple unit adjacent on Track 3.

One of the little perks in December is 7 day a week parcel delivery from Canada Post, which meant I got a knock on the door about 3pm on our Sunday aftenoon with a box from Shapeways being dropped off.  Lots of new goodies in HO scale, for projects ongoing and not ongoing.  Two test prints of two new speeder car designs, a Woodings CBI, and Fairmont M14.  Some street furniture (storm drain grates to a Toronto design, Bicycle lock posts, and garbage/recycling bins), and streetlight lenses for wall mounted streetlights.  The latter group are all for the 587 Yonge Street project I wrote about last week.  Most of the items below are available on my Shapeways shop (or will be active in the next day or two now that i know they print), though I found a couple of tweaks to the two speeders that I need to try and make, there are still issues with the seat back and armrest on the M14 in particular not being strong enough to survive shipping intact. 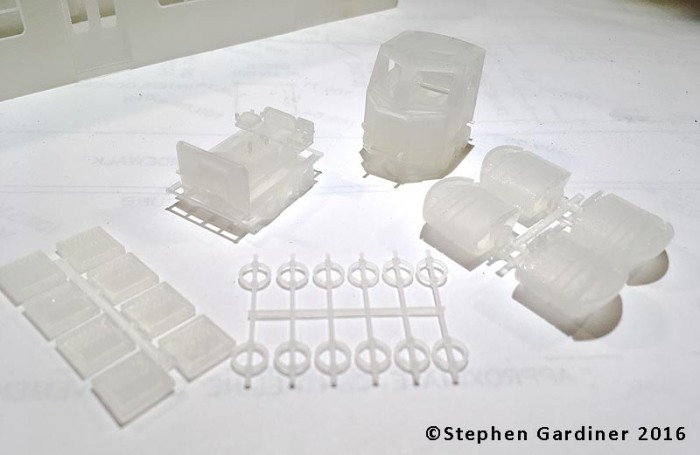 Sunday mail delivery goodies from Shapeways, Sewer Grates; a Fairmont M14 Speeder; Bicycle lock posts; a Woodings CBI (the body comes off so you can paint the interior); garbage recycling bins; and whatever that big project that shall not be named is hiding in the background 😛

I need to pick up some more primer and get some primer on them, unfortunately, the parts are almost impossible to see the details on without them being primered!

What a year its been in model railroading it’s been for me.  A whole lot of firsts.  My first Railway Prototype Modellers (RPM) Meet, my first blog post, my first narrow gauge project, my first fully 3D printed cars (underframe and body’s), and more. As the year draws to a close, I thought it was time to reflect a bit on what I’ve achieved in the year, which will inevitably lead into a future post on what I want to work on in 2017 (and another reassessment of why I’m so good at coming up with projects I want to do, and wind up with so many partially completed ones on the go!).

But, for now, looking back, attending my first RPM Meet back in March, the Toronto Railway Prototype Modellers meet at Humber College was a great experience.  A lot of fantastic modellers, who brought their work, and three outstanding presentations on different aspects of our hobby.  One of my biggest fears with going out with my work is the sense of being judged by others over decisions I’ve made, or my choices in how much detail/accuracy I must have in a model to satisfy me, but all those fears were allayed in a setting where everyone was open and out to share and learn.  The 2017 Toronto RPM is on March 18th, its in my calendar and hopefully I will be there!

A table of my models amongst a room of amazing models at the Toronto RPM at Humber College.

While none of the fully 3D printed cars are actually complete yet, I have now designed and had 3D printed both a freight car (QTTX Heavy Load flatcar) and a passenger car (Dominion Atlantic “Nova Scotia”).  Both cars have had issues with my design and learning about how to design cars, but I’ve overcome them.  The TTX car isn’t done as I had to eventually redesign and reprint the central deck, to overcome a warping issue.  The new design now has three channels in the body for hidden brass bars to add torsional strength to the car to keep it from sagging.  For Nova Scotia, I’ve hit the limit of what 3D printing can do at the moment with fine details, specifically the observation platform railings.  BGR Group has etched the right railings for their resin CPR kits, but I haven’t been able to connect with them and try to buy some for Nova Scotia.  Hopefully I’ll see him in February/March at the Copetown show to rectify that. 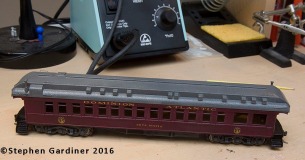 QTTX 131344 with the original saggy centre deck, and DAR Nova Scotia more or less complete except for observation handrails.

Narrow gauge, oh my.  One of the “niche” addictions many have.  I don’t know why the bug has bitten me, I’ve only seen working narrow gauge once, and that was on a specially laid bit of track in the Carrog Station yard during the Steam Steel & Stars 2 Gala at Llangollen Wales in 2009.  I’ve never visited any of the “Great Little Railways of Wales”, the marketing name used by the group of narrow gauge lines in Wales.  Despite that, for some reason, the fact that a Thomas and Friends locomotive which was 3D scanned from a real locomotive, Talyllyn at the Talyllyn Railway in Wales, inspired me to buy it and convert it from a Thomas toy to the real locomotive.  I’m not done the project, but its by far the smallest and most fiddly locomotive I’ve ever worked on, being much more N-scale than the HO Scale I’m used to bodging about with.  This is one where 2017 will bring many new developments including a narrow gauge diorama/layout of some sort to run it on. 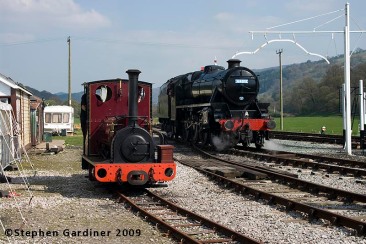 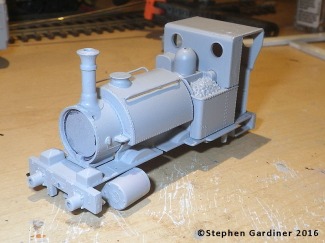 Narrow gauge locomotive “Irish Mail” running at Carrog in 2009, with a standard gauge Black 5 in the background, and the work-in-progress Talyllyn OO9 model in 2016.

As I was writing this post, I was trying to think of projects and models I finished in 2016, and despite what many I know seem to think is my prodigious output of finished projects,  I don’t actually think I finished that many things in 2016!  That of course depends on how your parse the projects.  When I look at the spreadsheet I use to keep track of projects and what things I’m looking to buy, it tells me I finished Don Station, Cabin D and the toolshed structures, which are part of the diorama of the railway village at the Toronto Railway Museum I am building, but the spreadsheet also tells me that the larger diorama isn’t done.  Looking at dates, it was July 2015 when I met with my friend Trevor Marshall to learn from him how to make realistic looking trees (his layouts forest stands up to inspection both from the aisle, and from a camera mounted to a car giving a trains eye view of his layout, a real amazing feat!).  A year and a half later, and the diorama has a bunch of barren looking armatures that I still haven’t braved making foliage for and completing.  Depending on how you want to count, I either finished a bunch of projects that become part of a larger one, or made really good progress on a larger project but didn’t finish it.

The state of The Railway Village Diorama as 2016 comes to an end.  Looking very much like I’d planned, other than the hopelessly dead looking forest behind Don Station!

I did however finish a pair of Labatt’s leased reefer cars from the 1950’s, and they were a project which on several occasions tried to defeat me.  Between getting the right paint tone, rectifying problems with the Intermountain Kits, and screwing up the decals, they became a project that felt like one step forward and two back, but in the end, I have two cars I’m very happy with.  Similarly, the Canadian National D-1/C-1/C-2 project is one that I’ve effectively treated as done.  There are things i want to do, like fix some of the underbody details on D-1, and complete the interiors on C-1/C-2, it looks so good on display, I’m at that perilous point of saying that I’m happy with it, even if I haven’t done everything i wanted to or have started to do.  D-1 and friends are also a project that keeps coming back.  Since i designed if for HO Scale, I’ve been asked by Trevor to revise it to S Scale for him, and by several people into N-scale, both of which are now available on Shapeways for anyone else crazy enough to want one!!

Labatt’s Reefers and CNR D-1/C-1/C-2.  Projects I “finished” in 2016, at least until I start puttering again with weathering or details in the future, and the test print of the D-1 body in N-scale.

And, in the burying the lead of things I accomplished in 2016, after ages thinking about it, and following numerous other modellers I know and don’t knows blogs, I started blogging myself, and have managed to keep blogging on what I’m working on, what catches my fancy, and some railfanning to keep me honest and at least looking at the blog once a week.  My first blog post on this blog was on May 1st, 2016, since then, I’ve made 73 posts including this one, 32 of which are my weekly Tuesday Train railfan image, 41 of which are posts about something I’m working on or mulling.  That means, that despite gaps and posts sometimes coming in bunches when time to write appears, I’ve averaged over a post a week on modelling.  I’m actually very proud of this given my past attempts at blogging or writing which have all ended quickly in disinterest!!  There have been times I’ve wanted to write more, but this is meant to hopefully interest readers in what I’m doing, start conversation about things that interest me in the hobby, help others learn, and help myself create a record of what I’ve been up to for future reference.  I appreciate every visit, favourite, comment from everyone who wanders by the site and reads my sometimes coherent ramblings.  Thank you, and I hope you continue to find something in my writings that makes it worthwhile for you to keep reading!!

Onwards to 2017 in a few short weeks (as I already noted, with weekends away and an upcoming trip over New Years, I’ve called time on 2016 for actually doing any modelling), when hopefully some of my current projects can finally see a finish line, and where no doubt many more exciting new ones will come onto my workbench, but that’s a post for another day!!