My model of the former Dominion Atlantic Railway/Canadian Pacific Railway/Upper Canada Railway Society/Ossawippi Express Restaurant car “Nova Scotia” (here, here & here) that is in the collection of the Toronto Railway Museum now has been semi-stalled for several months.  I’ve been trying to obtain brass etches that BGR Group has done for CPR observation cars, that are the same design as those on Nova Scotia in the 1950’s as my model is, but haven’t had any luck.  I did draw and 3D print the railings, but they are very fine.  That said, I wanted to take the car to the Barrie-Allandale Train Show last weekend, so I set about installing the 3D printed railings temporarily. 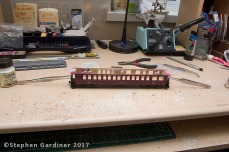 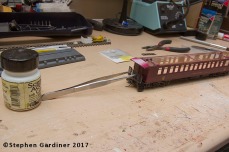 Installing the 3D printed railings on the observation platforms of Nova Scotia, using the highly technical method of tweezer supports to hold them in place while the slow setting glue cured.

To do this, I had previously painted the railings on my trip to my paint booth.  Using Woodland Scenics Scenic Cement, a removable glue meant for placing figures on layouts, I gently pried the railings into the holes in the platform.  Then, as seen in the pictures, I used tweezers for leverage to hold the railings while the glue set overnight.  The railings are flexible, as the glue forms a soft bond, rather than a hard bond as CA would, but I want to be able to remove the railings if I do eventually get etched ones. 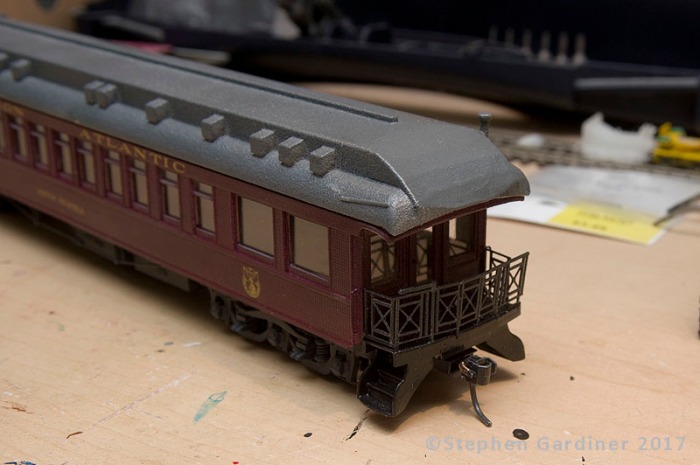 It took a couple of tries to get the railings in, but they did go in.  I am actually pleasantly surprised at how good they look, I think if I had installed them with CA, they would stand straight up, they have a bit of a lean with the soft glue, but it accomplished the goal of being able to bring the entire TRM Passenger car collection to the Barrie show.  The 3D printed etches will definitely work, though if I ever put the car for sale, I’ll need to either have the print include extras, or do them as a separate part with a supply of extras (or come up with brass etches I can sell/provide separately).  For my first run, I did them as a separate part in the higher quality “Frosted Extreme Detail” resin from Shapeways.  I haven’t seen the benefit of this material on large size prints for the price increase, but for something with fine detail like this, it seemed like a good choice.