We’ve recently made a big decision in our life, that we are going to stay in our apartment for a while longer.  Some of that, is driven by the cost of real estate in Toronto, some of that, by the fact we really love the neighbourhood we are in, and came to the conclusion that there is nothing wrong with our rental apartment that some new furniture, paint, and re-decorating couldn’t fix for a few more years.  Come July we’ll have been in the same apartment for 6 years, not an eternity, but long enough that when we moved in we were just dating and now we’re approaching our 3rd wedding anniversary.  We both brought a lot of hand me down and well used furniture to the apartment, and frankly, it was tired.  We’ve mostly focused on our living room, as this was all started by the acknowledgement that our sofa was life expired.  We’ve now gotten rid of some big entertainment centre cabinets that dominated the room and made it feel small, have a new sofa in place, a new rug coming, painted an accent wall, and moved about all our art and pictures to make the space feel fresh.  Its made a huge difference and now we’re looking forward to having friends over again!

So what does this have to do with model trains?  Well, it has a lot to do with it strangely, as it means I’m continuing my drive to move on from the dream of building a “big” layout, and looking for things that can keep me going in small spaces.  This is the first “Small Chunk” from the post title.  One of the things I’ve written about, and that I’m becoming more and more focused on is modelling in small spaces, like apartments or condominiums.  You can totally do it (I’d like to think on some small level my work to date is proof of that), but it means being smart and recognizing that you probably are not going to build a large layout. If I’m generous, I’ve built three layouts in my life (and if I’m realistic, one!!). 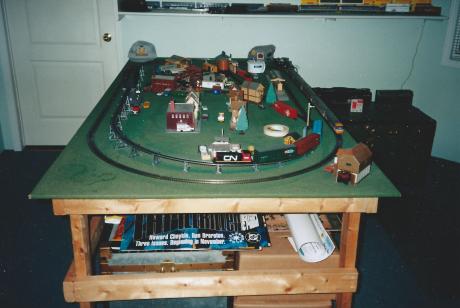 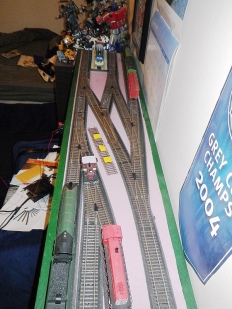 Three layouts? My 4’x8′ Plywood Central in Halifax/Waterloo; my IKEA shelf topper that still lives in a semi-sceniced state in Toronto; and my one real attempt at layout building in my parents former house in Georgetown.

Being in a small space doesn’t mean you can’t have any layout, it means you must have realistic goals and expectations and targets.  Modelling miles of mainline railway isn’t going to work in a 750 square foot two bedroom apartment with two people and a cat living there, but a highly detailed shelf switching layout will, and that can be designed so it can come and go so it doesn’t take up space when not being worked on or operated.  There are lots of examples of this.  The whole concept of a large layout is an anathema to most in the United Kingdom where many of my railway interests lie.  Even in houses there, without basements and in small homes they don’t have “empire building” room.  They build small layouts, and as often as not, they build many small layouts in a lifetime with different eras or railways being modelled.

I’ve written a couple of times about building layouts or dioramas on IKEA shelves that are easy to store in an apartment, and even mused last year on looking at ways of integrating it into a display layout for shows/operations. 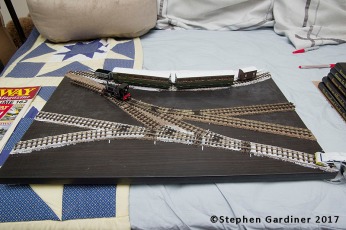 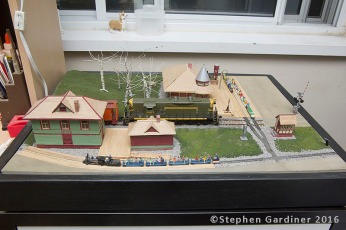 “Small Chunks” – Layouts or Dioramas in a couple of square feet that fit in IKEA bookcases.  From top left clockwise my 009 Switching puzzle in process; the TRM Railway Village; John Street Stall 15-16; and, a freelance Metropolitan Railway/London Underground station diorama.

Where my small chunks to date have fallen down is operations, they aren’t big enough except maybe in narrow gauge to actually operate in any meaningful way.  They really are dioramas, great for display and learning different techniques, but useless to actually run a train on.  That means, in HO/OO at least, they are too small a chunk.  The larger shelf I built several years ago as a test track has more potential for some limited switching/operations.  One of the problems is that frankly, North American equipment, even from the 1950s can be too big for small layouts.  You’ve covered the length of the layout in seconds before you even do anything.  I see why small layouts work so well in the UK when you are dealing with small locomotives and 2 axle freight wagons.  You can do a lot with small equipment.  I think as much as there are several things I want to model in Canada, when I clear some projects off the workbench and look at building something plausibly layouty, it will be a British BLT (a Branch Line Terminal, not a Bacon-Lettuce-Tomato sandwich!).

Some in Canada have taken this kind of small layout building to heart, and solved the operations issue.  While I haven’t had the chance to see it in person, a fellow Toronto area modeller, Rick De Candido has applied this concept to his “Filmore Avenue Roundhouse” layout in his condo.  It’s a tightly focused model of a locomotive depot and roundhouse in Buffalo New York.  It’s been written up in several magazines, and he has a great blog on his work. It also has lots of operations with locomotives in and out, bringing in supplies for the roundhouse, some coaching stock movements.  Rick can run a lot of trains without them really going anywhere!  On top of that, he’s written about his incredibly detailed operating scheme to ensure interest for operators on a small layout.  It’s the perfect conceptual match for what I need to be thinking.

Part of what made me think about this topic was a recent post Rick made on a concept of even further compressing what he’s achieved for even smaller spaces, the “Engine Terminal in Eight Feet (ETEF).  I’m looking at the two small “diorama layouts” I’m currently working on , and wondering where there may be opportunities to take these kinds of small layouts that have some operational potential to the next level like Rick has done.  Between the the Narrow Gauge switching puzzle, and the HO/OO “test track” layout I built some years ago in my last apartment, these both offer some limited switching puzzle type operations.  The Narrow Gauge shelf will give me a place to run my Talyllyn model, and the HO/OO one gives me a few feet for testing locomotives off rollers, but is slowly turning into a free-lanced colliery yard based on the railways of the National Coal Board in the UK.

My friend Trevor Marshall writes regularly about “Achievable Layouts” on his Port Rowan in 1:64 blog.  This is where I am heading with the first small chunk.  As much as I like building models of structures, or individual vehicles, at the end of the day, I want to be able to do that and run some trains!!!  Circling back to the top, the decision to stay in a 750 square foot apartment means making decisions on layout building based on limited space, and making anything I do work in the available space, and not mess up the rest of our lives.  This drives back to the small module/small layout idea.  With the right prototype and the right design, you can do a lot in a very small space, and this is where I see my mindset going in the near future.  With the stack of individual structure/car projects I have on the go, I suspect a modular/small layout of some sort will be a 2018 project, but there is a lot I can work on designing and pre-planning in 2017 when I don’t feel like breaking out the tools.

The second small chunk I’ve been thinking about of late is scenery techniques.  This is mostly because while the next step on the narrow gauge shelf is wiring, the step after that is ballasting the track.  I have to say it, I hate ballasting.  As I haven’t built a lot of layouts, I haven’t had a lot of practice, and getting the technique right is still something I haven’t reliably done.  My ballast seems to clump or float away or do some other not helpful thing no matter what I’ve done with alcohol or detergent in the glue or sprayed over to break surface tension.  I know I’ll get it, but when you are working on a small layout, messing up the ballast can really ruin the look of the project.  I saw a technique in a Model Rail bookazine on layout building/scenery techniques a couple of years ago from Chris Nevard, and he has blogged about it as well.  The technique is to use air dry modelling clay to create the appearance of an ash/cinder ground cover.  This is perfect for the larger OO Gauge Colliery Railway yard, and trying it on that has been on my mind for a while.  I think that for the OO9 narrow gauge shelf, the technique may also be useful, but I need to bite the bullet and try the technique and actually learn how to do it.

Colliery Diorama in progress.  The white area on the left is surplus sculptamold from another model that I used to bring the ground level closer to track height before trying the DAS clay/cinder technique of Chris Nevard.  I need to do some more sculptamold for some other parts of the yard, then try the clay.

Scenery is a “small chunk” as its something that I’ve had mixed success with.  I’ve said it before, I often analyze myself into paralysis when trying things.   I need to just go for it more, some of my best successes in terms of results are from when i’ve just gone and done it.  And if I’m serious about building a more organized small layout in the short-term (as opposed to the two I’m working on, I’ll need to get good at some scenic techniques, as there is less room to hide shoddy work in a small layout.  I built the base of the layout above and laid the track in the fall of 2010.  It’s 6-1/2 years later, and it looks at best half finished and thought out.  Some of that is changing ideas of what it would be, some of it is my paralysis in taking it down from its cat-proof location and working on it.

With a bit of thought and some effort, taking these two small chunks together, I am aiming to move myself towards being in a place later this year where I have a real focus on a layout I can build and actually start doing so.  We’ll see where time and effort takes me in the coming months.

One thought on “Taking it in Small Chunks”