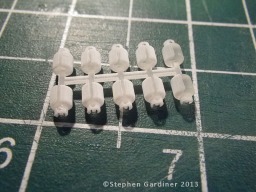 So the news is in, and its not all bad, but its also not good for my larger models.  Despite my reservations when Shapeways initially announced the pricing changes, I would say at least 3/4 of my models that are for sale have gone down in price, and I am working on updating pricing to reflect that and pass on some of the savings to customers.  Even some of the models which are more expensive to print I am adjusting the markup where possible so I make a bit less but can hold the prices.  No crazy big price changes, most are a $1-2 reduction, though some things like the body shells for D-1 in HO at least is getting a nice $15 price drop.

The bad news, is that large items like structures which were already at the edge of affordability are now in the not-affordable range.  One major personal project I have been working on has gone from $175 to $600, so I will be going back to the drawing board as it were to look for ways to reduce the amount of the structure that is 3D printed vs. traditional techniques.  Its a bit frustrating.  The good news is, some things that hadn’t necessarily been affordable before that are not yet for sale are coming down in price, making them hopefully more attractive to people shopping my store when they are released.

My Shapeways Store is linked on the side bar and here: https://www.shapeways.com/shops/sjgardiner