I’m just going to post a link to my friend Trevor Marshall’s post on our afternoon yesterday, as I couldn’t write up the day any better myself.  I always appreciate an opportunity to bring some fun and whimsy to my hobby in amongst the serious model making that goes on!!

Happy 150th Birthday Canada! This Saturday, July 1st, 2017 marks the 150th anniversary of the British North America Act, which created the County of Canada. VIA Rail Canada has wrapped a number of locomotives and cars in special bright schemes for the 150th Birthday, listing names of places VIA Rail serves on the sides of the locomotive and coaches.  VIA Rail 900, a P42 is seen here leading Train 64 eastbound to Montreal just outside of Newcastle Ontario on June 26, 2017.

I picked up a new tool back in February at the Barrie-Allandale Train Show, a “Nibbler”, a tool designed for cutting out holes or curved shapes inside material.  I knew I would need this for the 587 Yonge Street project to cut out the windows.

A Nibbler, the small cutting blade at the left cuts a rectangular segment away from plastic or wood material.

Using the nibbler, I am currently cutting out windows for the building, first in blank styrene for the inner wall, then in brick sheet for the exterior walls.  Its a slow process, but it makes nice clean square openings (*once you learn how to use it, some of my cuts as you can see in the pictures are less than beautiful!).

Process to cut openings with then Nibbler, mark windows, drill pilot holes, drill 3/8″ holes for the nibbler blade.  Cut out the larger opening, and fit the windows into the opening.

I have got the windows on both walls that have them cut out, the process to cut the window openings in the exterior Brick that need to be much closer to perfect fits is taking a significantly longer time than the one evening it took to get used to the tool and cut the first batch of windows out.  I’m thinking I over-complicated things with the amount of detail in my 3D printed windows, as the cuts to the brick sheet that need to fit tight to the windows are taking a very long time.  I’ve got 5 windows done, only 15 more windows, a door, and a vent to go…at least it will fill a bunch of nights in the next couple of weeks as I slowly work my way though cutting out the windows to make sure it looks good when finished. 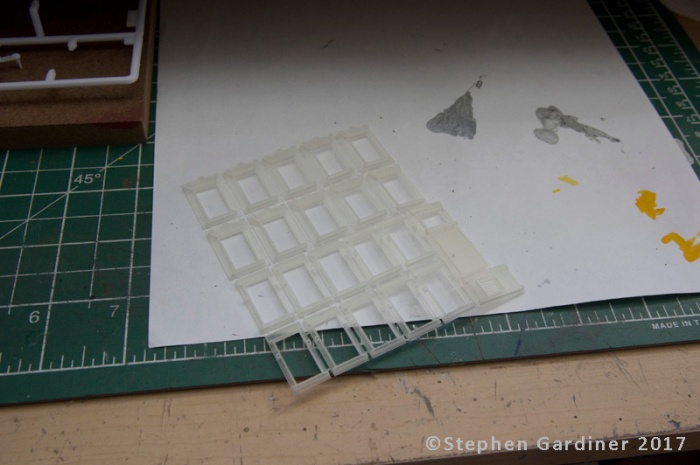 3D Printed Sprue of Windows and Doors for 587 Yonge Street.

Amtrak Train 63/VIA Rail Train 98 the “Maple Leaf” between New York City and Toronto approaches Union Station along the four track section by Sunnyside in Toronto.  The train is operated using Amtrak locomotives and coaches, but with a VIA Rail crew between Toronto and Niagara Falls at the border.

I’m busily working away on my mini-diorama of the former building at 587 Yonge Street.  I received my Shapeways order with my 3D printed parts for the building.  I’ll talk about them and assembling the main building in a future post, for now, as I’ve previously discussed, I’ve been working on the roads and sidewalks and associated details.  While I’m modelling a pretty small area, there’s a fairly lengthy list of details to make the street, sidewalk and patio pop and resemble the real world:

For this lengthy list of little details, I’ve used all kinds of techniques.  Some things bought off the shelf, some scratchbuilt, some 3D printed.  I’ve also been bad and haven’t been taking pictures as I work.  I’ve been squeezing in five and ten minute bursts of action the past couple of weeks when I’ve been home, and realized as I started this post, I’ve been able to take lots of finished pictures, but not many in process.  I apologize for that oversight!

I previously blogged about these 3D printed details (other than the manhole cover) here.  I find that little details like these can really make a difference.  Look around you wherever you live or go.  There are little details like the style of garbage can, manhole cover or other things (fire call boxes in San Francisco, Red mailboxes in the UK) that can really define an era or location.  In my case, I’m modelling modern Toronto, and the two most defining things are the weirdly oblong Garbage/Recycling Bins, and “Post and Loop” bicycle locks.  Seeing these in a model, anyone who knows Toronto would know right away they are looking at a modern era model of the City. 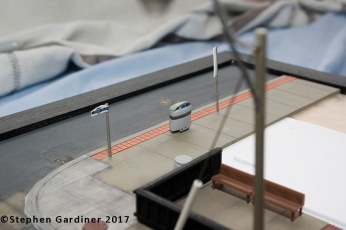 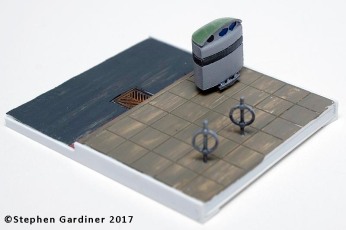 Even the manhole covers are different in different cities and eras.  On a large layout, I can see not worrying about these details, but on a diorama that’s 12″x12″ in size, I can’t skimp on doing details right, it would bother me in the long run, and a little detail can go a long way to making the finished project feel real.

My model will feature two Toronto style streetlights.  One a wall mounted lamp which is seen along Yonge Street where there isn’t room to put up street poles, and one, an “Acorn” lamp, which is an older style found on many residential streets in the old City of Toronto.  I wanted both of these to work, so I designed the light housing for both and had them 3D printed by Shapeways in their Transparent Acrylic material.  This is a semi-transparent frosted material, that does a good job of diffusing light from LED’s.  The streetlight has a 3v Pico Chip LED inside it, as the wiring is just loose at the moment, I can’t easily take a picture of it lit up (there will be lights on the street, and in the building, wiring everything together to the power supply is a down the road task).  As I don’t have the building done yet, I haven’t got pictures of the wall light, but I have built the pole light using the 3D printed light head, some aluminum tube, styrene tube, and piano wire for the guy wire.  Because my model only has one light pole, it won’t have electrical wires running across and down the street from it, as there is no where for them to go and be supported. 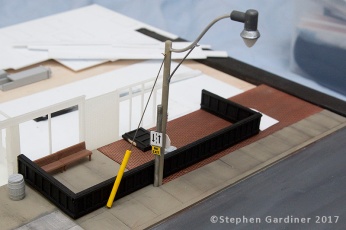 Acorn Streetlight in place with guy wire and signs.

For the guy wire, I found two eye bolts in my scrap detail parts tray, and some 0.020 piano wire.  I slid a piece of styrene tube over the wire to replicate the plastic shield over the guy wire, and bent the ends of the wire to go into the eyebolts.  For now, this is all loosely assembled so I can take things apart during construction, but I wanted to see how everything goes together.

Similar to the other “street furniture” above, signage conveys a lot of information in very little space.  Different styles of signage tell you when a model is set, and where it is set.  For these, I have gone with an old technique.  I’ve found signs online, using sources like the Highway Traffic Act Regulations for Ontario Standard sign layouts and sizes, and the City Website or Google for others.  I then modified them in Photoshop to get the positioning of groups of signs, or to edit them to have the right information on them.  The signs are scaled and printed on a laser printer at the highest resolution it can do, carefully cut out, and laminated onto 0.010″ Styrene using a thin smear of good old-fashioned white glue.  The signs are trimmed from the styrene sheet once the glue is dried, and fastened to poles as appropriate.  I had considered making Decals using the laser printer and Decal Paper, but this can be hit or miss with my printer, and I know the printed signs work and look good.  Some things like stop signs are available, but why spend money on them when I can make my own much more cheaply using things I already have available? 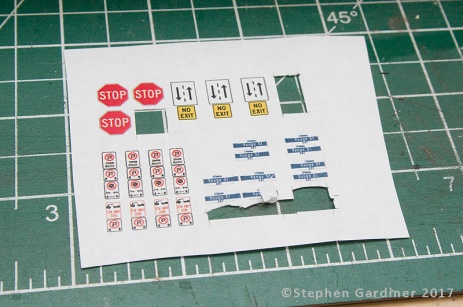 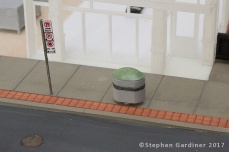 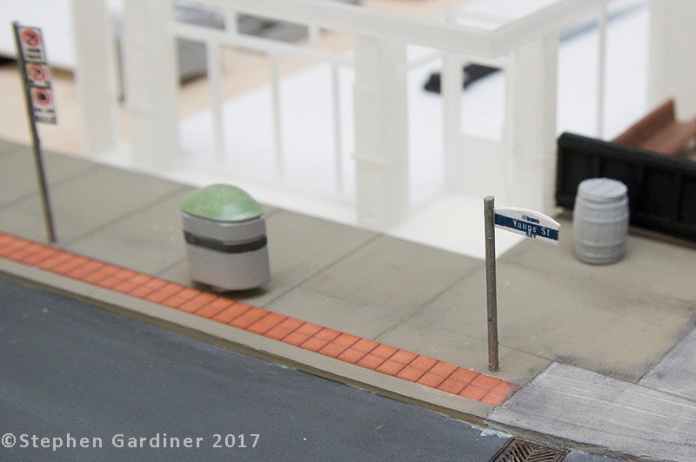 Street signs printed on paper, laminated to thin styrene, and mounted.  The posts are all still removeable so I can get them out of my way when working on the building.

I still have to go back and add some street markings to the pavement.  I think I’m going to use PanPastels, but I need to pick up a white and yellow to do the few lines I need on the streets.

These couple of items are more about setting the specific building rather than the general era or location.  587 Yonge Street had a big patio on the Dundonald Street side of the building.  It was surrounded by a wooden fence, and the tables were a mix of wood benches and metal chairs, with barrels and patio tables, along with an outside bar.  This is still a work in progress, but the fence has been made, using a basswood core and Mt. Albert Scale Lumber to create the pattern of sections.  Next up for this is to add-on the benches to the wall now that the fence is painted.  For barrels, I got a set of them from Grandt Line, which have been assembled and primered, and just need painting to look like weathered wine barrels. 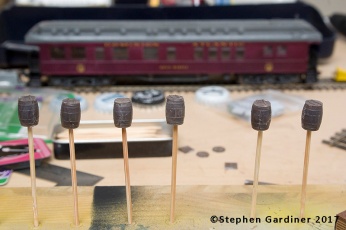 Barrels ready for painting, and patio fencing in place to create the look of the patio.

I picked up some cafe tables and chairs from Noch cheap, and have re-painted them black to better blend in.  These are packed away as they are finish details when everything is done.  I don’t necessarily work to order, but do things as the opportunity presents itself.

As you can see from this post, I’ve been reasonably busy with the street and the public realm part of the model.  I have been working on the building as well simultaneously, but I want to actually make some progress towards something that looks like a building before blogging about that.  The mini project components in this post are east and short tasks, that I can do when I don’t have big blocks of time.  The next major tasks of starting to prepare the building walls are tasks that I need some lengthy blocks of time and thought for.

Thus far, I’m really happy with how this project is going.  Just need to keep the wave of motivation up as the heat and humidity builds into the summer, and it becomes less pleasant to work in my office/workshop/spare bedroom in our apartment.

CNR Mogul (2-6-0 Wheel Arrangement) Number 81 enjoys her retirement in a park along the former railway yards in Palmerston Ontario.  The locomotive was donated to the Town of Palmerston by Canadian National when she was retired in 1959 as CNR was phasing out steam locomotives and was fully dieseling operations.