So, this post has nothing to do with Trains.  There, you’ve been warned, look away if you are only interested in my ramblings about model trains.

Anyone who knows me, will know that I like sports, and a lot of different sports.  I watch a lot of Hockey (Ice Hockey for my UK friends), Baseball, Football (of the Gridiron and Beautiful Game varieties), Rugby, Golf and Car Racing.  Yes, Car Racing…what’s that you say, not a sport? Maybe in some aspects, but the drivers are just as much athletes as those in the other sports I mentioned.  Is there an aspect of luck or having the best car that dictates who wins, some days in some series absolutely, but don’t tell me it’s easy to drive at speeds up to 300km/hr for 2-3 hours at a time with high g-forces and the level of attention needed to not turn the lump of metal and carbon fibre around you into a deadly weapon.  My only experience in a high performance race vehicle (a performance G0-Kart at a friends bachelor party at the Mosport Kartway) wound up with me upside down wearing a Go-kart in the middle of the track, not my finest hour!! 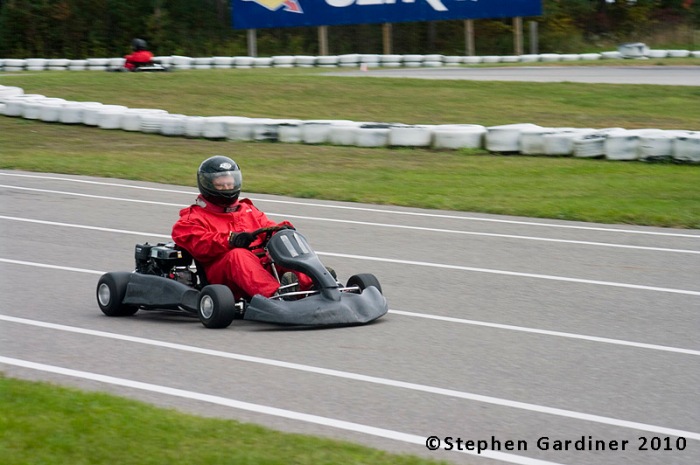 Me, shortly before experimenting with a new Go-Kart shaped hat at the Mosport Kartway in 2010.

So, with that said, the type of car racing that I pay the most attention to is what is generally lumped into the term “Sportscar Racing”.  This is endurance racing, long races with multiple types of cars on track at the same time.  There are two main series I watch, the World Endurance Championship (WEC), a series of 6 hour races around the globe which also includes the legendary Grand Prix D’endurance at Le Mans France, the 24 Hours of Le Mans.  The second is the IMSA Weathertech Sportscar Championship, the North American equivalent of the WEC which runs mostly 2hr 45 Minute Races, but with the 24 Hours of Daytona, 12 Hours of Sebring, 6 Hours of Watkins Glen and Petite Le Mans (10hours/1,000 miles) making up an extended length sub-series of the season.  The Cole’s Note version of an explanation for a beginner is that these series are composed of four classes of cars, two classes of “Prototypes”, or purpose designed and built race cars that look more like UFO’s than street cars; and, two classes of GT Cars, or cars which are based on high performance street cars (think Ferrari, Corvette, Porsche, Lamborghini, Aston Martin, etc).  The two main groups are then further divided based on whether Manufacturers are involved or not, and whether the drivers are all Professional, or Pro-Ams, where some of the drivers are “amateurs” who have money and the desire to go racing.   It’s more complicated than that, but that’s enough for you as a model railroader to have a high-level understanding of what’s going on (assuming you’ve made it this far)! 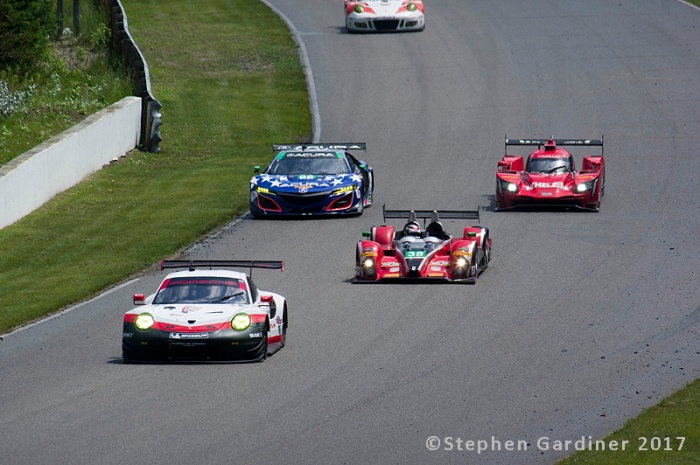 So, to bring this long ramble back to modelling, I, like many I know, got into all kinds of different scale model making as a kid.  I talked about this a little on another project I recently finished here.  I’m in the midst of a little dalliance with building plastic kits again.  The project I’m about to talk about, is actually the last of the three, but I’m not quite ready to talk about the 2nd yet (that’s the next “Not About Trains” post).  My favourite team in the IMSA Series is Corvette Racing.  If I had all the money, my first purchase would be a Corvette (A 2017 GS would do nicely thanks).  Then, after a summer of suffering being barely able to get in and out of it (I am after all, a bit of a big kid size wise), it would be the first thing I’d sell too (but at least I’d have one summer of owning and driving an awesome sportscar!).

Last year, Revell, the main plastic kit maker in the North American market announced they were releasing a 1/25th scale Corvette C.7R, the race version of the current car.  This was a must buy for me.  When it finally came out, the kit was a bit of a mishmash.  The designers originally had access to the 2015 race car, but by the time the tooling was done and the car produced, they included decals for the 2016 #4 car, which is fine, as that car won the 24 Hours of Daytona, which gave me ideas for display.  The problem was, there are a lot of little details visible in the bodywork that changed between 2015 and 2016, so I had the choice of living with good enough, or making some effort to improve the model. 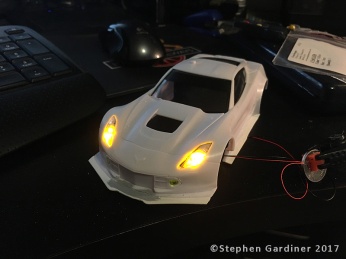 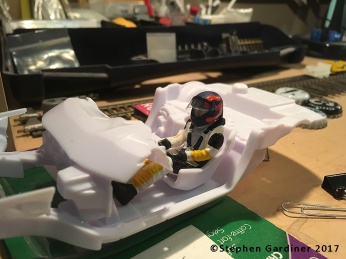 Working on the plastic kit, updating the body work and testing LED headlights on the left, and adding a resin driver figure on the right.

I settled on the obvious answer, if I’m going to do it, do it right.  The body changes involved extending the valances on the front and sides, creating a new rear diffuser (a series of wings under the car to create down-force to hold the car to the track).  I also hate that almost every model race car I’ve ever built lacks a driver figure.  When I was a kid, I had a shelf with probably 20 nascar models lined up, all of them without drivers.  Even before the kit for the car was available, I was on the search for a driver figure.  Fortunately, there are a number of options out there,  and one was perfect, a resin manufacturer named GF Models makes a range of sportscar and Formula car drivers and mechanics.  I found a retailer in Belgium who sells their products, and one was duly ordered.

I also wanted to have the headlights lit.  In sportscar racing, the headlights are a major feature, as they communicate information about the type of car coming up behind you.  White Headlights mean one of the prototype cars, which are faster, yellow lights, mean a GT, which is slower (relatively speaking).  Having the headlights be more than just static paint was something I wanted, and the advances in small LED’s and their availability, made that possible.  I ordered some 3mm sized yellow LED’s from Evan Designs (as a note for fellow Canadians, GLX Scale Models sells Evan LED’s in Canada, but he didn’t have what I needed so it was faster to order direct rather than through a middle man, I buy most of my LED’s through GLX whenever possible), these run on 3V, or a little flat cell watch battery.  The LED’s come pre-wired, so it was just an issue of making holes in the bodywork for them, and snaking the wiring around. 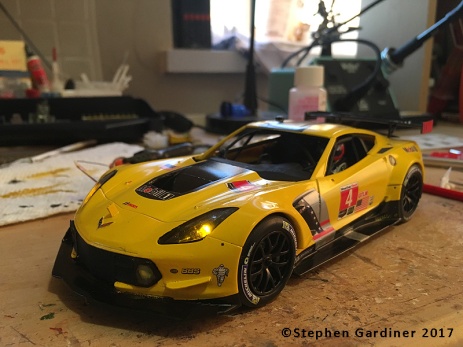 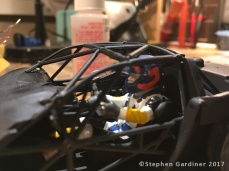 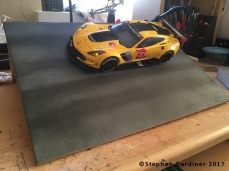 Closing in on the finished product.  The painted and decaled body without windows in, the interior with miniature Oliver Gavin, and the car on the partly painted display base testing everything looks ok.

With the model modified, the assembly was pretty much straight forward plastic kit, paint, assemble, follow instructions, add decals, etc.  While I was working on it, I knew I wanted to get it signed by the drivers.  The car itself is a bit small for being easily signed, so I decided to build a base that would double as a display stand on the shelf.  Using a birch plywood panel I had bought for another project, but wasn’t happy with (the board warped in our apartment), I bodged up a bit of racetrack for the car to sit on.  As the car is decaled to look like the 2016 Daytona Winning car, I painted a start-finish line for the car to be crossing.

The one visit of the year to Canada for either of the big series is mid-July at Canadian Tire Motorsports Park (Mosport!!!).  The series is very fan friendly, with open pit walks before the race, super access to the cars and drivers, and an autograph session before the race.  I made sure I was at the front of the line Sunday morning at the Corvette Trucks to have Tommy Milner and Oliver Gavin sign the model.  Unfortunately, they had a bad day, late in the race Tommy got bumped and most of the front end of the car was destroyed.  Fortunately, modern safety standards for both the car design and the walls of a racetrack meant that Tommy was OK and walked away from a scary crash. 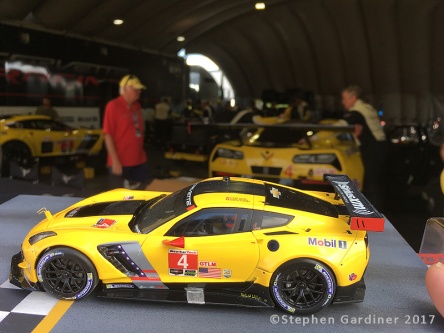 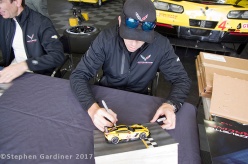 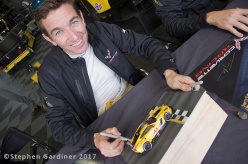 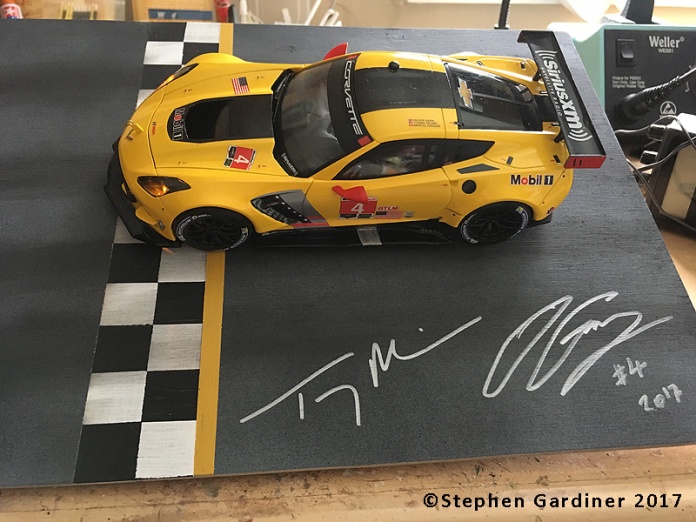 At Mosport on the weekend, the model with the real No.4 Corvette behind, and being signed by two of the three drivers Tommy Milner (top) and Oliver Gavin (bottom).  The third driver only does the four long distance races, so if anyone knows when Marcel Fassler will be in Toronto on Vacation so i can stalk him (or even better, if someone wants to pay for me to go to Daytona in January or France in June!!)…

While none of these bits of modelling are identical to working on model trains, they are all the same skills, just being applied differently.  As I said earlier, I’ve been having a bit of a dalliance with building model kits over the past year.  It’s been good as it’s given me some variety in what’s on my workbench at home, and something different to look forward to and think about.  It’s not that I haven’t worked on trains while I’ve been doing these, but the option to say tonight I want to work on figuring out how to drill holes to fit the LEDs while not screwing up how the kit goes together has been nice.  I’m also finding that I’m now super motivated to get on with some railroad projects that have languished, which at the end of the day, may be the best reason of all for having taken a break to do other types of modelling.