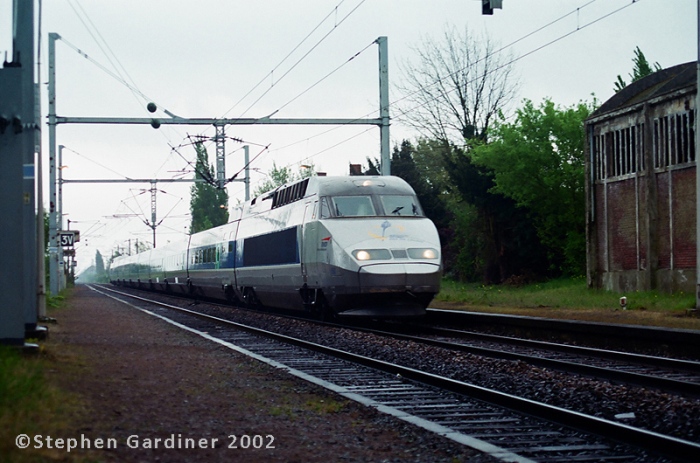 Railfanning in Vimy France in May 2002 during my exchange course in England.  I had a great schedule, classes on Monday morning and afternoon, full day field trip for the Canadian exchange Students Wednesdays, and nothing Tuesday, Thursday, Friday, Saturday and Sunday, which meant lots of travel.  I took weekends in Paris, Northern Ireland to see family, Dublin, Newcastle (family again) and one for England stuff not a part of the trip.  Others went much further afield covering off typical European trip hot spots like Amsterdam and Rome on their weekends.

The shot above is a TGV (either an Atlantique or Reseau set, the numbers aren’t clear enough on my shots and I don’t know the spotting differences).  The shot below shows a Nord-Pas de Calais Region TER Z 92050 electric multiple unit.  If you look closely, the cars are bi-level, with a lowered floor between the trucks where there is also an upper level. Behind the train is the at the time abandoned two story original Vimy station building.  The active modern platform with no station building or shelters where I was sitting was just up the line.  In looking at google streetview and maps images today, the original station has since been demolished and all that’s left is the shelter and seatless modern stop.

There are not a lot of times where I contemplate whether I have made good or bad life choices, but sitting in the rain as dusk fell on a Friday in early May 2002 at Vimy station waiting and hoping my train back to Arras would appear after walking up and down the ridge from the Town to the Canadian Vimy Memorial is one of them (the Canadian students who work at the monuments response was they couldn’t remember anyone ever saying they walked up from the train station in the Town).  I remember being thoroughly drenched, tired, hungry and pretty miserable when I took these pictures…which still put me light years ahead of the conditions experienced by so many people younger than I was (early 20’s at the time) 85 years before when the Battle of Vimy Ridge occurred in 1917.  Perspective means a lot, no matter how rotten I felt at the end of that day being tired, soggy and hungry, I was heading back to Paris for a warm bed and good meal, not to a wet trench or to face the horrors of war.  Maybe I was tired and soggy, but all things considered, I wasn’t that badly off, and what at times had seemed like a tough day walking through the French countryside, wasn’t that hard. 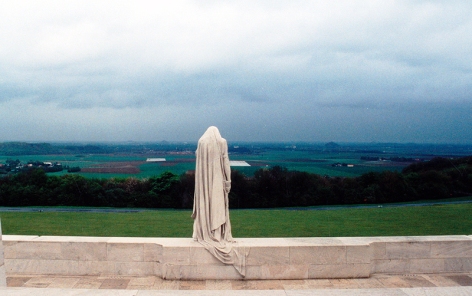 The Canadian Vimy Memorial during my visit in May 2002.

This is post 4/5 in my Retro August Scan Cafe finds for Tuesday Train.