Skip to content
HomeLearning to Solder… again or properly, or both?

I learned to solder in high school in electronics classes, and have over the subsequent 20 plus years, more or less completely forgotten everything I learned.  I was by no means an expert in high school, but I could competently connect wires.  Over the years, I’ve done a bit of soldering on basic stuff, feeder wires, lights here and there, but its a skill that has so many applications in model railroading that I need to get better at.

Etched brass grab irons and door handles on a British Railways MK1 coach.  Working on soldering them on.  The brass door hinges just didn’t make sense and I couldn’t manage the size, so I replaced them with 0.020″ styrene rod pieces to look like hinges.

I have a bunch of wiring projects to do, but I am currently working on building a Southern Pride Models British Railways Mk1 Coach.  I recently gave up on the etched brass door hinges, but the etched grab handles and door handles needed to be done, as there isn’t an obvious replacement for them.  These are nicely etched, but very small, and need to be fitted into the holes, soldered from behind to the brass car side, then the soldering filed down so the side is smooth for mounting to the clear interior that forms the cars sides.

I’ve never managed to solder brass parts together, and one of my friends has offered to give me some soldering lessons (and I will be taking him up on that when we find a date that works), but I wanted to keep making process, so decided after watching some YouTube videos, that I would at least take a stab at soldering on my own.

I bought a new soldering iron last year, and haven’t really used it.  This would be a fiddly project, but I recently got some new liquid flux, to help clean the material as it heats and get the solder to flow into where I want it to go, so I figured I would at least have a fighting chance of soldering six handles and six handles.  After some time fiddling around, I did actually manage to start getting solder to flow into where I needed it to go.  Having not done it before, I was being gentle not wanting to apply so much heat that I warped or damaged the brass car side.  By the time I had one side done, I declared the night a success and will do the 2nd side another night! 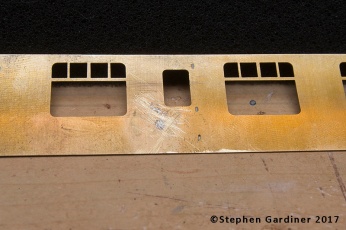 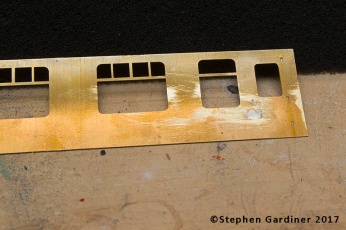 Soldered in, and filed/sanded down to flush on the back.  It would appear that my solder joints have held after filing off the excess solder and etched brass parts.

My solder joints, while strong, had a lot too much solder.  Finding the handle on getting a little bit of solder to run into the opening around the etched parts is certainly something I need to work on.  That said, after getting the parts hot enough for the solder to run into the opens, and even after filing down my largeish bits of solder the joints held, and the handles are still in place, and the etched brass car side still fits smoothly on the clear plastic inner side. 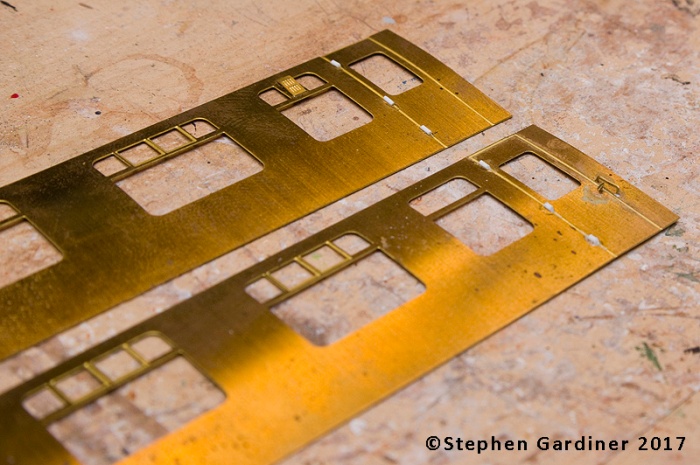 One side done, one to go.  The only damage appears to be a ripple in the car side from where some dolt dropped it to the floor while soldering.

I’m very curious about others experiences with learning to solder and taking their first shots at something.  I see so many amazing modellers that I know and follow online who make it look so easy.  I’d really love to hear some of their story’s of failure and learning, as that’s what this is for me.  A learning experience.  It probably took me 30 minutes to get the first joint done, and I wrecked two etched door handles and three etched hand grabs in the process.  Normally this would generate a lot of swearing, but in this case, the etched fret for the kit has such a large supply of etches, that I’d have had ample extras for the two sides if I’d wrecked three times as many trying to get the technique right.  Fortunately, the next two doors went much quicker, probably 15 minutes for the 2nd and 10 for the third.  With three more to do on the 2nd side, I think I can have it down to a reasonable 5 minute job per door.  Once I do the 2nd side tomorrow night, I can wash the two sides and hit them with some primer to protect the brass and get ready to paint it.

One fully fitted out car side, ready to clean, primer and paint, once the 2nd side is done as well.

One thought on “Learning to Solder… again or properly, or both?”