Model Railroading is a hobby of research as much as it is of doing.  At least it is if you area “Prototype Modeller” who wants to ensure their models are as accurate a representation of what we are modelling as can be achieved in a scale model.  I spend a lot of time in libraries, archives, scouring online for information and pictures about models that I’m working on.  This is OK, as I love research and gaining knowledge.  It keeps me inspired to do better at my modelling by having as much information as possible before I start a project.

This means that modellers tend to have a lot of books and photographs around, as we are constantly looking for information and references for what we are building.  Last week while I was out to dinner with a group of modellers, a potential simultaneous build project to modify a ready-to-run steam locomotive to be more accurate to its Canadian National prototype came up.  With motivation, I finally went out and bought a book that I should have bought when it came out in 2013, “Canadian National Steam”, a book which provides as complete a history as likely will ever be possible of every steam locomotive owned by Canadian National Railways. 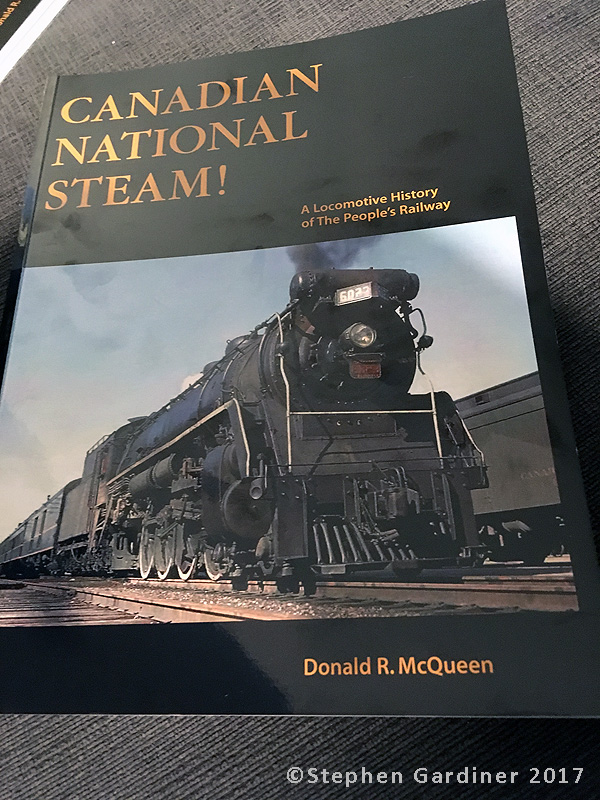 Canadian National Steam published by Railfare DC Books.  This is Volume 1, an overview and details on different aspects.  Volumes 2-8 are detailed rosters of different wheel arrangements, with lots of pictures and details of when major modifications to the locomotives were made.

Budget considerations dictated that for the moment, I bought Volume 1 and one roster book, though I should have at least 6 of the 7 roster books eventually.  I’m not sure I need Volume 2 on oddballs and Newfoundland.

Like most modellers I know, the last thing I need is another project to be added to my pile, and I’ve written about my stack of projects in the past.  Despite that, this would be a different project, a chance to collaborate with a friend on something I’ve wanted to do for a while with the locomotive I already own.  I only need to settle on which specific locomotive I am going to model, then find the appropriate detail parts to update and improve the model.  As part of this project, it will give me the opportunity to work on my electronic skills as well, as the headlight LED in the locomotive is a sickly shade of green light, and I’ll be installing DCC and sound, once I make sense of the non-standard 9 Pin plug on the locomotive and how to re-wire it for an ESU Loksound decoder! 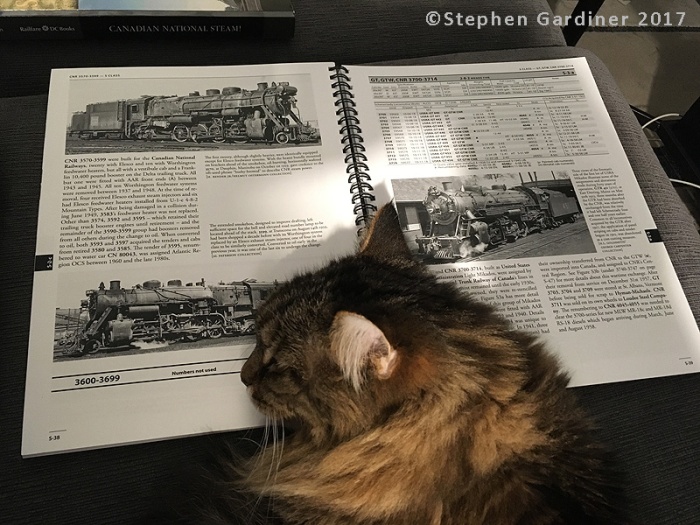 Fergie “helping” with my research in one of the Roster volumes of Canadian National Steam. I think she felt it was bedtime and I should stop reading and start providing a place for her to cuddle in the night.

The good news is that I am contemplating this project the weekend before one of the larger train shows in the area, the Hamilton & Ancaster Model Train Show (formerly the TH&B Society Flea Market).  This show happens twice a year, in January and November.  The next two are Sunday November 12, 2017 and Sunday January 28, 2018.  I try to go to both, but winter roads can make the January one iffy, so whenever possible I go to the November Show.  I went with friends last year and hopefully will do so again.  The show is a good chance for me to start searching for detail parts and supplies for new and ongoing projects, as the show tends to have lots of these available.  I’ll post somewhere in the future about the specifics of the locomotive project I’m going to be working on.  For now its just the research phase!!