As I work on designing the track plan, and how I am going to build the layout and fasten it to the top of the furniture that will support it, I am also busy looking at the buildings I will be modelling to provide industries for switching.

This is the first of a series of posts on the buildings I will be modelling in part should the Liberty Village layout come to pass.  The first industry and building I am going to profile is one which will be a focal point of the layout in terms of appearance, but is an industry which won’t be rail served (by an active track at least).  The Brunswick-Balke-Collender Company produced Billiard Tables, Bowling Alleys, and other game and other bar/entertainment supplies.  The Brunswick Company still exists to this day and is still making pool tables (just not at the Liberty Village site in Toronto).

Brunswick started to acquire the land which formed the Toronto site in 1905, and commenced construction of the factory following this.  The plant remained in operation until 1960 when Brunswick sold the land.  During operations, there was a railway siding along the east side of the building on Hanna Avenue which had loading docks for boxcars.  The yellow brick is both unique in liberty village, but also a very historic Toronto thing.  The yellow brick is very possibly a product of Toronto’s Don Valley Brickworks, as the glacial clay used for much of the brick made there before the 1970’s resulted in the yellow/buff brick colour.  Many buildings in Toronto built with Don Bricks can be identified by this brick colour (I have a buff Don Valley Brickworks brick complete with “DON” stamped into the surface which I “may” have acquired on an urban exploration before Evergreen’s restoration of the plant started).

40 Hanna has been converted in recent years to office and retail uses.  Unlike many old industrial buildings, it hasn’t been torn down or converted into residential uses.  The City of Toronto applied a formal Heritage Designation to the property in 2015 under the Ontario Heritage Act.  This ensures that the building cannot be torn down or modified without the involvement of the City and ensuring that the heritage aspects are protected.  A detailed history of the building and why the formal designation was sought is included in the Evaluation Report posted on the City website in the Council Minutes.

The City has permitted modifications to the Boiler House building to create usable space.  The Boiler House building is now accessible as a branch of a bank.  Changes approved by the City included permitting the creation of new windows and doors, which were designed to resemble the brickwork and detail of the existing doors so that they look like part of the fabric of the building.  For my purposes in modelling, these extra openings won’t be there, so I’ll be able to basically ignore them. 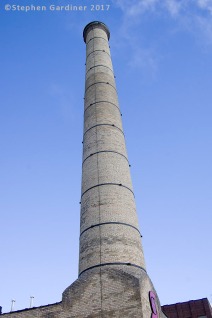 The Boiler House building and chimney.  Now converted to make the interior space usable, and with a row of new windows in the east wall to let light into the interior of the building.

For the layout, I have space for a slightly compressed version of the boiler house, with the south wall of the building forming a background building.  Both will be constructed primarily using brick pattern sheet.  I will print custom decals for the wall signage on the main building.  There were at least 3 rows of signage based on the pre-restoration photos.  When the signage was redone several years ago, only the roof level company name signage was restored.  The top level was as restored, the company name, the 2nd level down looks like “English American Pocket Billiard Tables” and the 3rd level down was “Bowling Alleys and Supplies”.  I am still on the search for pictures of the building where the signage was in better condition and more legible than those I’ve found to date.  The 2nd level sign is very washed out in the couple of pictures I’ve found, and while it looks like the first word is “English”, I don’t know enough about pool/billiard tables to know if that actually makes sense.

The south wall of the Brunswick-Balke-Collender building, showing the restored signage on the roof level (there was signage on the next two courses of brick down as well, the historic pictures I’ve found of the building aren’t clear enough to read them in their entirety though.