As I posted the other day, I attended the Mississauga Model Railroad Flea Market today, but not as a shopper, but as a seller.  Something I had never done with any of my model railroad belongings before. I’ve never parted ways with anything in any meaningful way. Just over two years ago when I started blogging about my modelling, I mused about whether or not the effort to sell stuff was worth it.  With our decision to buy a house, and move, that pushed me to finally give it a shot. What’s the worst that could happen? I could spend a Sunday and not manage to sell anything and still have to move it. Or, I could spend a Sunday and sell models I no longer need or want onto new homes, and wind up with money in my pocket for buying a DCC system and building benchwork for my layout. 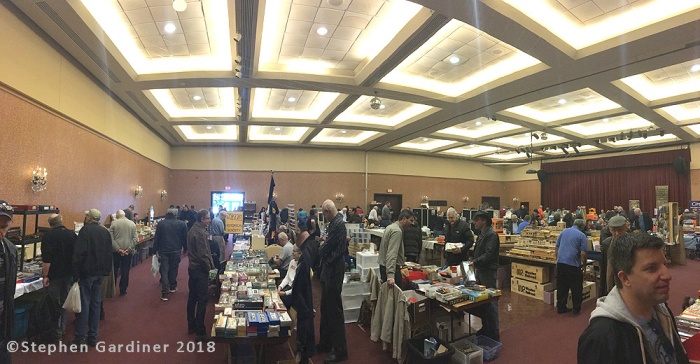 A view of the Mississauga Model Railroad Flea Market shortly after opening. The new venue at a church in Mississauga is a really pleasant room for spending a day in.

I’m pleased to report, that it most definitely was worth the effort, but there are caveats to that.  I sold a lot of stuff, but that is in no small part because I priced my items with prices that were generally on the low side, because I am/was a motivated seller.  I didn’t actually haggle a lot on a lot of things, because people looked at the prices and felt they were fair.  This has always been one of my problems shopping at “Flea Market” type shows.  I don’t go to spend over what something is worth on something you have been dragging across the province for years until someone crazy enough to over pay you for it.  I’m happy to pay reasonable values, and was happy to sell for reasonable values. 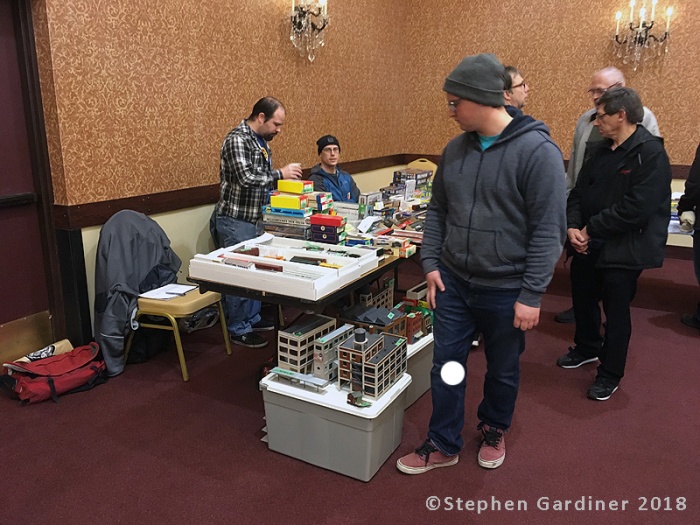 My co-table mates Dan and Ryan look at my large stack of rolling stock and buildings for sale.

I didn’t bring everything I could have, knowing that I was sharing the table, but, I  brought a lot of stuff.  Two 80L plastic tubs of structures and boxed rolling stock, and 3 A-line totes full of loose rolling stock.  By the end of the day, I had one tub and one A line tote left full, so a reduction of well over 50% in what I brought.  Because I was a motivated seller, unlike some you see at these shows who are doing it as a business or a sideline, I set my prices such that my stuff sold.  Is there stuff I sold for less than its value, absolutely, but there is also stuff that even at $5 or $10, I probably sold for more than it was worth.  At the end of the day, I achieved my goals of reducing the amount of model trains that I don’t need in my storage locker, and in making some money to re-invest in my hobby.

Its certainly not for everyone, its a long day, and it helps if you are organized and have a list of what you have and want to sell, but if you are willing to make some effort, you can certainly convert models you don’t need or aren’t using into funds to re-invest in the hobby.  Will I do it again, definitely, but it may not be for years, but I will do it again when next I think I have enough items to try and sell to make it worth my while.