As I am starting to get settled into the new home, and get the non-layout parts of the layout room sorted out, I’ve been turning my mind back to design and construction of the layout.  I am happy with my track plan that it has reached a point where It will be an interesting to operate layout, and that it ticks the boxes of the things I want.  I am also reasonably comfortable that I am not biting off more than I can chew so to speak in terms of construction or modelling.  I am also now moving onto important details I couldn’t address before living in the house, like locating the studs in the wall for anchoring the layout to, and seeing if mounting brackets to them will interfere with anything mounted under the benchwork, such as switch machines.  So far so good on that count, but still have some more work to do to be sure (I don’t fully trust the cheap stud finder I have, need to get a better one to make sure I am designing to anchor securely into the studs as much as possible vs. using wall anchors). 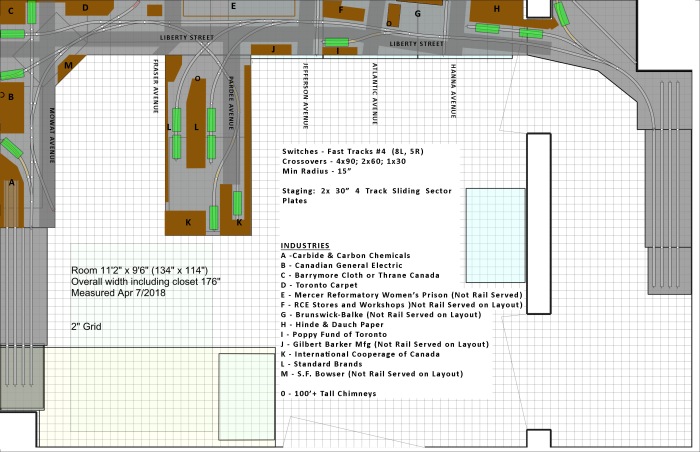 Track Plan as of July 10/2018 showing two four track traversers for staging at each end of the layout (with tail tracks to allow run arounds/storage). I’ve since discovered that in the closet, I can probably only have the front two tracks because of bracing for the shelf above the layout, but that’s ok.)

A critical element to the layout operating and working well, is the two staging yards.  I am planning on building sliding traversers at either end of the layout, and they are causing me headaches, probably equal amounts from my usual paralysis by analysis, but also by the need to come up with a reliable design, that can easily be built and mounted to the wall.  Effectively, I am building two drawers without sides, fronts or backs.  They will however, need to be well thought out to be mounted to the wall, and ensure that the sliding deck doesn’t bind on either end.

I’ve found an example online from an Australian modeller whose design I really like, and which with appropriate modifications can work for my layout.  I’ve been sketching in AutoCAD at work on a similar design for my layout, using full extension drawer sliders from Lee Valley for the motion.  My traversers will be 30″ wide by approximately 12″ deep, which is wide enough for what I want the maximum train length on the layout to be and to accommodate 4 tracks with generous spacing. 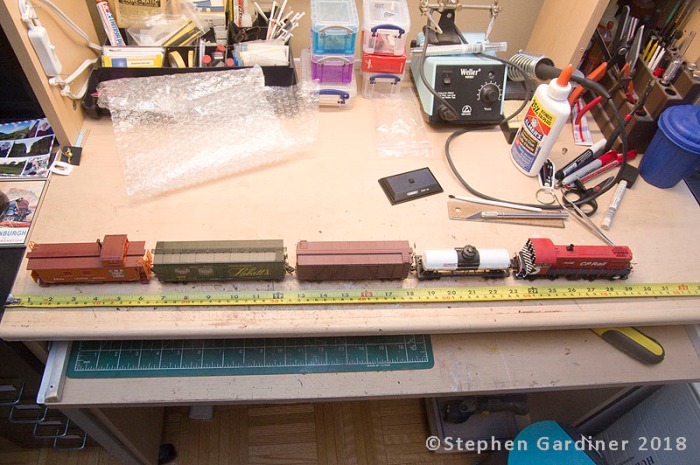 Measuring train length for the layout. Locomotive, 3 x 40′ cars and a caboose as the maximum length for normal operations, means operators will have to go back and forth to get cars from either the Parkdale CPR yard or CNR’s yard at Exhibition (not sure what it was called, I haven’t found the name).

I am planning on starting layout construction in the closet, with the traverser that will represent the CPR Parkdale yard.  This is for a few reasons, key among them is the sooner I get construction done in the closet, the sooner I can sort out the storage beneath the layout in that area and, if things go horribly wrong with mounting or something else, the closet is kinda hidden from view. I figure start and learn in hiding, then move out into the light!!

Sometime in the next couple of weeks I am hoping to finalize a design for the traverser and its mounting in the closet.  While I don’t have to, I am leaning towards building the traverser with the same benchwork design as the main layout, a 1/2″ plywood base, with a 1/2″ foam layer, and the track mounted on cork roadbed above this.  I could dispense with the foam on the traverser, but I think overall construction will be easier if I am consistent all around the layout rather than trying to be too cute and design the traverser to need to be mounted at a different height from the rest of the benchwork to be aligned.  It also means I can design the traverser unit with a mount to fasten the plywood benchwork heading out into the sceniced part of the layout to hopefully have them align nicely.

We shall see, but design continues apace and my current goal of having some benchwork up in August and be laying track in September seems eminently doable at the moment.