Back in early 2017, I started on a small Ikea Shelf layout for narrow guage equipment, not based on any prototype or anything, just a shelf diorama to display some 009 Gauge models I have bought or customized.  Today, to break from working on the new layout, and to frankly, get it off my workbench where it was dominating the space, I finished wiring feeders to the track, and did some test running with Talyllyn.  The little shelf seems to run fine.  I’ll need to run it in more before balasting and doing some basic scenery, but a couple of hours this morning while watching car racing got it done and off the bench. 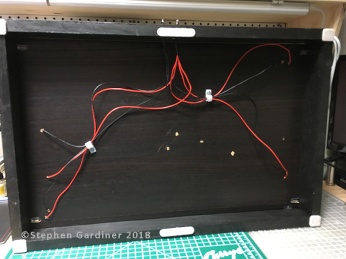 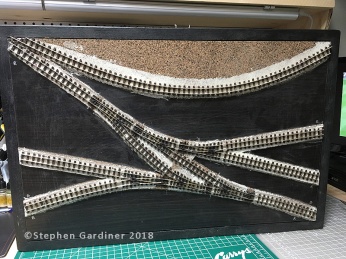 Bottom and top views of the narrow gauge diorama/layout on an Ikea Inreda shelf.

For now, since all the wire I’d cut weeks ago is now soldered into place, the shelf and its frame have gone away into the ever emptying closet (turns out building the benchwork has inspired me to finish the clear-out started before moving!).  With my workbench back and feeling like I’d accomplished something rather than just putting it away in shame, it was on to other layout projects and preparing for selling more surplus models in September at the Lakeshore Model Railroaders Flea Market on September 16th, but I’ll post more about that closer to the date.

One thought on “Taking a Break from Benchwork”