There’s a train under that snow somewhere!! Eastbound toward Ottawa at Fallowfield Station just west of Ottawa, VIA Rail 6424 on the rear of the train at the moment, but which will lead the train back west in a couple of hours is a bit worse for wear from blowing snow.

I’m going to a different show than the couple of times I’ve been to the Lakeshore Model Railroaders Flea Market in the past year. I’ve still got plenty of things from my old layout or that I’ve bought over the years that now don’t fit the layout I’m building. I’m not going to post a complete list here, but in case anyone who reads the blog is interested, a few of the new and harder to find items are below. If you are interested, leave a comment before the end of the day Saturday and we can make arrangement for it to be set aside for you. 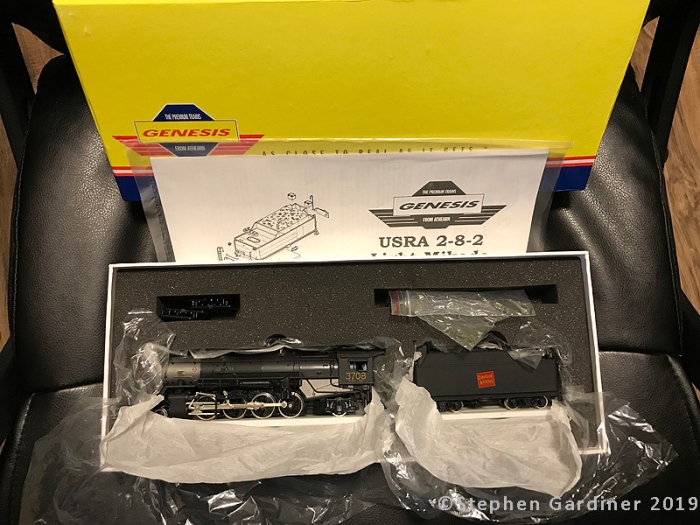 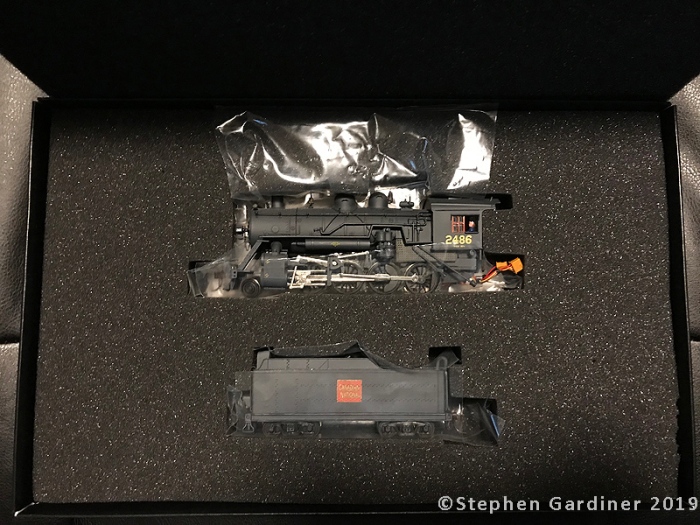 A partial list of what I will have at the show on Sunday is below, feel free to leave a comment if you are interested in anything and we can see what we can do:

Union Pacific in the West Toronto Junction. A long way from home for UP 3002, a General Motors SD70ACe-T4 (Tier 4 Emissions Standards) locomotive. It had been on loan to Canadian Pacific for testing by GM to try and boost sales of the new more environmentally friendly locomotives. Its seen here in January 2018 at the Lambton Yard in the Junction Neighbourhood of Toronto.

I was working in the corner of the closet on “Parkdale Yard”, my faux staging tracks, and I wanted to put in a mockup 3rd track behind the two I laid, there is room for about half a width of track. Rather than cut a perfectly good piece of flex track in half, I have some spare rail from the supply I bought for building switches, and a giant bag of pre-cut wood ties, but before I get into what I’m doing track laying, a lesson in the importance of never stopping learning, but also never forgetting learning you’ve already done!

How do I get the shape cut on this strip of ties to squeeze into the corner of the backdrop?

My lesson for tonight is in the latter, I was trying to figure out how to get a template for cutting an arc through a batch of wood ties tacked together with tape so they would perfectly slide into the corner of the benchwork, then it came to me, PLAN 110 in January 1999….The Blue Bendy!!!!

The Blue Bendy in action in the corner.

OK, so no, I haven’t had a blow to the head. But as I was thinking of how to create a pattern, I remembered something from the Introduction to Graphics course in the second semester of the first year of my Urban Planning Degree at the University of Waterloo. The “Blue Bendy” is a tool designed for transferring a line or shape from one drawing to another. It’s a plastic bar thing that you can bend to shape, and it holds the shape when you move it from one sheet to another. If you’re interested in picking one up for yourself, its real name is even less creative than Blue Bendy, the Staedtler Mars Flex Curve…. I’ll admit, the name isn’t super creative, but it does at least do what it says on the box!! 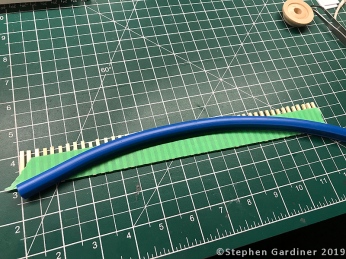 Easy does it, position the Blue Bendy where you want it, trace the side with a pen/pencil etc, then cut along the line with a sharp hobby knife.

With a cut line made from a ruler that conveniently changes shape to that of the corner, it was easy to mark the line, cut the ties with a sharp knife, and then make some minor adjustments. I can’t go any further, as I don’t seem to have any HO Scale Tie Plates or spikes to actually put a piece of rail on the ties. I guess I can probably glue them to the roadbed so that’s done at least, but another step forward on a Sunday night.

Cut and fit into the corner to create half a 3rd track in Parkdale Yard.

This weekend, in my process of constructing the Liberty Village Line, while I am still plugging away without laying track, I decided to start converting the large remnant piece of 0.060″ Styrene from the backdrop into the structures for the layout. 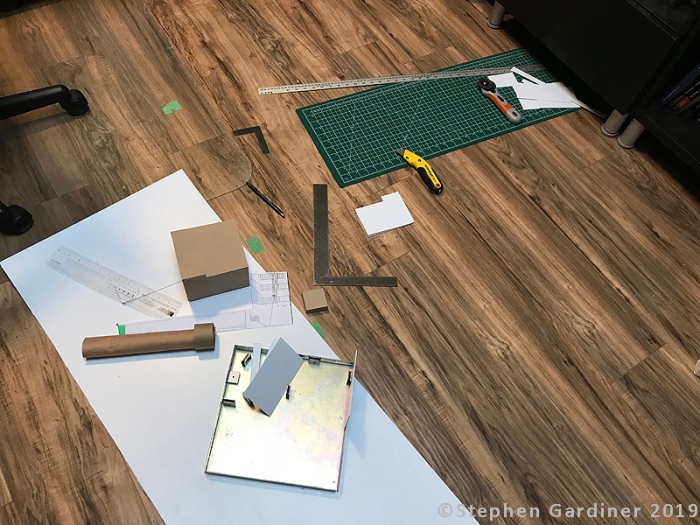 Not the most convenient work surface, but when I was dealing with an 8′ sheet of styrene, the floor is all I’ve got to get rough cuts done at least.

With the big chunk of leftover styrene, I have enough material to make a serious dent in the internal cores of a large number of structures on the layout. I decided to start with the only structure I’ve mocked up (I’ll mock-up the others once the track is laid and final alignment known). The first building to start taking true physical form is the power house for the Brunswick Balke Collender company, which made pool tables and bowling alleys and other entertainment/games. The buildings are both still there, the powerhouse (now modified to be a bank), and the factory building which houses offices and restaurants. 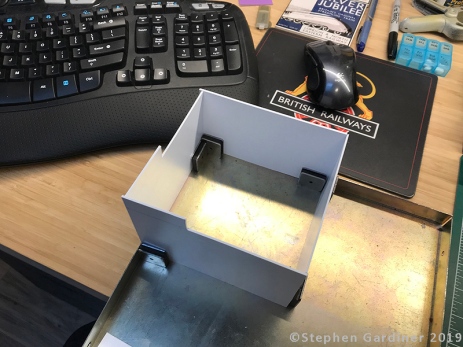 With the space I have for the layout, my boilerhouse is about half the size of the real building. I’m compressing it by shortening the building, so that I can fit the main wall of the factory onto the layout as well. This is a pretty simple building for the main structure. Four walls, for my purposes, only three openings, two doors and a window on the south wall adjacent to the tracks. 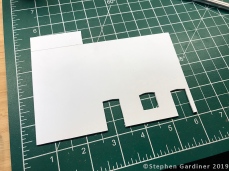 This is a simple building, only the “front” wall adjacent to Liberty Street has any openings in my selectively compressed version to fit the layout space.

The Chimney will be a bit more complicated. I’m still working on how I’m going to creat it. I also don’t have nearly enough patterned brick sheet for building the larger buildings or the chimney. I’ve got a show coming up next weekend where I’m selling more stuff from the collection (I’ll post an update about that mid-week). The Chimney has a taper from bottom to top, and then a flare at the top. Fortunately, the Chimney is a down the road problem. First things first is to build the main part of the building. 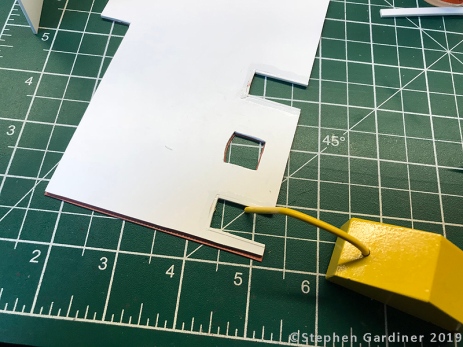 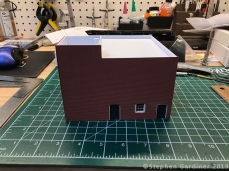 This is being built-in “traditional” ways. Sheet styrene, injection molded styrene doors and window from Grandt Line (now out of business, all their tooling has bought by a new company, the San Juan Model Co.). It was a nice simple structure for my weekend, four walls, a roof, a bit of detail around where the chimney will be. After working on and off between other household tasks, the walls are all together, with brick, the window and doors are in place, and the roof is rough cut in place. I held off on attaching it as I am debating best order of operations for attaching it, detailing it, etc along with the building walls so I don’t take a step that then makes painting the walls the buff beige/yellow colour that the brick actually is, as opposed to the red of the styrene sheet. 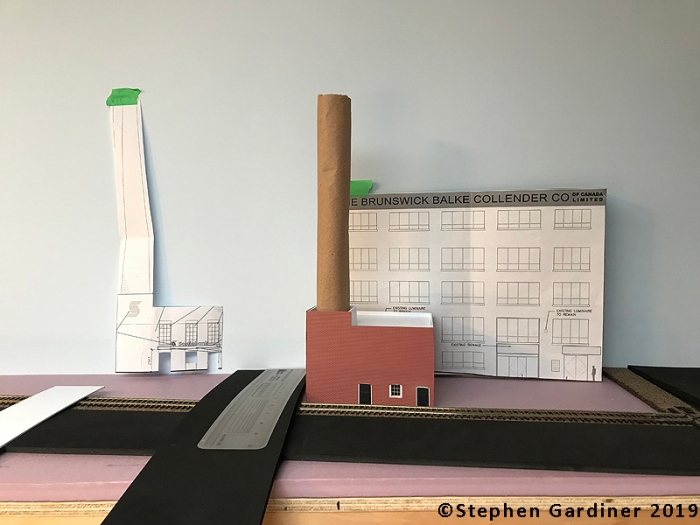 Replacing the cardboard structure with a taped on printout of an architectural drawing (of the modernized building) with some styrene and a cardboard chimney (everything in due course).

While I doubt that I will have been able to paint it before the Copetown and Toronto Railway Prototype Modeller meets at the end of February/Beginning of March, I suspect this will be one of the few things I actually bring with me to these get togethers, if only because I haven’t been building much else that’s portable in the past year with the house move and layout construction!

UPDATE, JANUARY 30, 2019 – Shapeways emailed today saying the pricing adjustment for FUD plastics like my models are in is temporarily on hold while they try to work out some pricing issues with the changes. They are saying a few weeks, I will update this post again when a new date is announded.

I’m not sure how many people who stumble across my blog wind up being the ones who buy things from my Shapeways Store, but it seems only fair to warn people about an impending price increase. Shapeways told designers/sellers some time ago that their pricing structure was changing to factor in more things into the costing, which is a mix of material, machine space, and part handling charges. When they first told us, they said anything already on sale as being grandfathered at its current price until sometime in 2019. That time has finally arrived, and on February 4th, the new prices will go into effect. For most of my models, the price changes are not significant, and to be fully honest, a few things like the CNR/CPR Don Station and Cabin D signal boxes will actually go down a bit in price, but some of my top sellers, the S Scale Speeder Cars will be going up in price $3-4 US depending on the car and the material choice made (Smooth vs Smoothest Detail Plastic). The S Scale Speeders are currently between $18-$25US depending on the material.After February 4th, they will be between $22-$28US, so get them while they are a bit less.

I’m not happy about this, as they are really good sellers, but there is also no value in selling them as the couple of dollars I make on each fund me doing test prints for other projects that are in the work, unfortunately, as with everything, the cost of production is going up, and some of that has to get passed on to the end user. We will see if it affects sales. I’ll have to revisit this in say six months time, but its so hard to know with S Scale whether a change in sales is because I’ve literally sold to every S Scale modeller who wants them, or if the small price increase has driven people away.