Skip to content
HomeDigital Command Control for an Atlas S-2

Starting Point for a Saturday, one Atlas S-2 mechanisim, ready to have its electronics removed and DCC Installed.

Yesterday I got together with my friend Trevor Marshall, an accomplished model railroader. He recently did a DCC install in a Walthers Southern Pacific SW-1, a similar small switcher with a tight body for working in to my Alco S-2 for Liberty Village.

After stripping out the Atlas Board, and unclipping the wires, there is lots of room to hard wire in the decoder.

As the only DCC Install I’ve done was a plug and play into my CNR D-1, for this install, even though the Atlas board had an 8 pin socket, in discussing with Trevor, he advised that removing the factory board would allow for a better install that can better use the features of the ESU Decoder than plugging into the Atlas board. I was game, but I’m not the best solderer, and there is a lot going on in rewiring a locomotive. As Trevor is experienced, when I asked if he’d be interested to do/show/help me on an afternoon, he generously agreed. We started out session out with lunch at his local The Harbord House, and then retired back to his basement to his workshop to work through the install. 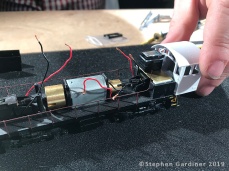 Installing two speakers, ESU Sugar Cubes, one in the front where Atlas left space for a speaker, and one in the cab along with an ESU PowerPak Keep alive.

For the Install, I had an ESU Loksound Micro decoder, two sugar cube speakers, and the ESU PowerPak keep alive capacitor. This last unit means for a short locomotive like the S-2, any small gaps in power from electrical shorts or dirty track are not likely to shut the engine down while the layout is operating, a nice feature. 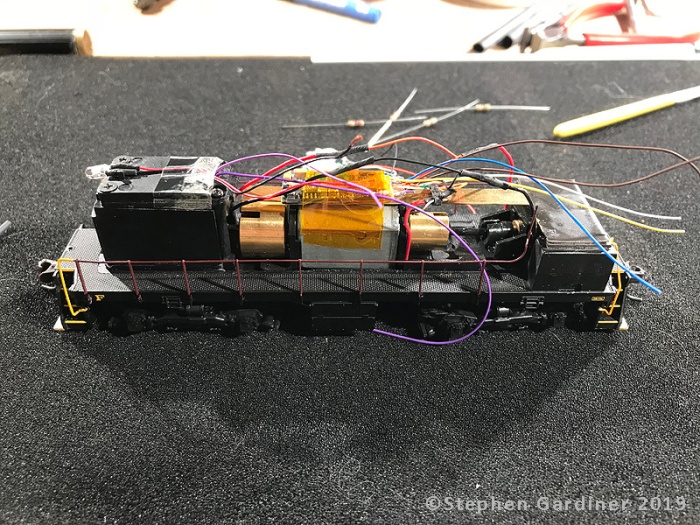 About half way done, moving on to the rear to complete the speakers and PowerPak Keep alive.

One thing I learned is how important it is to think your steps out before you take them. For the most part, we didn’t have to undo anything, though a couple of wiring runs and hook ups we definitely managed to make harder than they had to be. Watching Trevor work I now understand how everything can go together, the challenge will be making it all happen when I get to the point of doing an install myself.

While the sound files loaded, we looked at a bunch of projects Trevor has on the go, including one where I can apply some 3D design and printing to help him get something done that he hasn’t otherwise been able to do, but that’s a post for another day.

One of the things I like about ESU is that their decoders come without sound, and you can download the sound files for a huge variety of locomotive types from their website. With the help of a LokProgrammer, a tool which connects a computer to a track for programming, you can set up and test all the functions of a locomotive. Buying one of these is high up on my shopping list.

Success, loading sound files. The locomotive was successfully programmed and running. As usual, I neglected to get any video of the sound once we had the body back on and everything adjusted.

It ran fantastic, nice and slow, the sounds were great. All in all, a successful day. I was able to watch and learn from someone who understands what he is doing, and hopefully for the next time I’m doing this, I can work on my own now that I have a sense of what all goes into doing the job and doing it well.

Now to get a paint booth sorted out so it can get some maroon on the primer and let me move this project further on to completion.

One thought on “Digital Command Control for an Atlas S-2”