GO Transit MP40PH-3C Number 621 leads the 7:04 Kipling Station-Toronto Union Station train from Milton into Kipling Station this morning. I was headed downtown and felt like taking the train over the subway to do so! 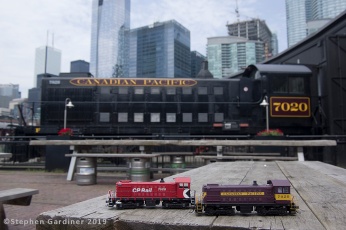 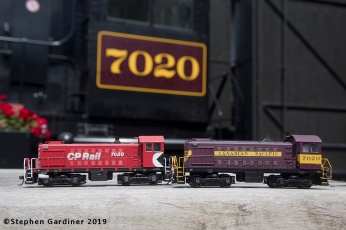 Ain’t they quite the family? Three of the four Canadian Pacific Railway paint schemes that Alco S-2 Number 7020 wore in her life. The recently re-painted preserved 7020 in as-delivered 1944 Black with Tuscan boxes and yellow/gold lettering. The tuscan with yellow was introduced sometime in the late 1940’s/early 1950’s, and the Action Red Multimark was applied sometime after 1968 when it was introduced. All that is missing is 7020 in CPR Tuscan and Grey with script lettering (see here) that would have been worn from the early 1960’s until it was repainted after 1968. I’ve never seen a photograph of 7020 in the tuscan and grey  with block lettering that was applied between 1955 and 1960, though many S2’s received this version. Switchers didn’t get repainted a lot, so the fact that 7020 wore four paint schemes between 1944 and 1986 when she was retired is actually quite impressive!

All three 7020’s can be seen Sunday May 26th at the Toronto Railway Museum‘s Doors Open Toronto Open House from 10am-5pm. I’ll be there between 10 and 3 if anyone wants to talk modelling and you’re in the Toronto area.

HST No.43002 “Sir Kenneth Grange”, named for the designer of the locomotive type and repainted into original Blue/Grey/Yellow brings up the rear of a Great Western Railway service to the west of England on January 3, 2018 at Slough.

The end of an Era. I grew up as a kid thinking the InterCity125 was the coolest thing ever. So much so, one of the first train sets I ever received was a Hornby IC125 set in the 2nd grey swallow scheme (I always wanted the initial blue/grey, blue’s still my favourite colour!). This past weekend on May 19, 2019 an era ended in the UK, with the end of HST service on The Great Western Railway from London’s Paddington Station.

They must have made an impression on me, this is the 5th Tuesday Train featuring the HST!

This is a sad post, and something that is one of my greatest fears when I go to shows and display models on behalf of myself or the Toronto Railway Museum. Shows like Prototype Modellers Meets where stuff is out for a day and people from the show are always there are one thing, but bigger, full weekend shows where you might set up on Friday night or Saturday morning, and leave things set up for one or two nights trusting in the venue and the organizers security always makes me nervous.

Images of the damage done the night of May 17-18, courtesy Market Deeping Model Railway Club

Unfortunately, the worst struck the Market Deeping Model Railway Club in England on Friday night. After their venue closed following Friday setup, four youths are accused of breaking in, and demolishing everything setup for the show. Models and layouts that had taken decades to be constructed and in which people poured untold hours of time and effort into were kicked about and destroyed. In the two days since, people have started fundraising efforts to help the club and the attendees address the damages, and while its a laudable effort and one I support, it can also never replace what was taken.

More on the Market Deeping incident:

And, while I think there are more important things to fund raise for in the world, I am going to make a small donation to help those who had their hard work senselessly destroyed, if for no other reason as an act of paying it forward. I know having this happen to me would devastate me, and while money won’t fix things, hopefully knowing that others share their pain will help them move forward and not lose the love of our hobby that brought them to be there exhibiting in the first place. I also hope that this event doesn’t send a chill through my fellow modellers about going to shows and displaying our work. It helps to bring people into the hobby, and is a valuable way to meet people, share and learn skills, and enjoy the social side of the hobby.

One of the planned workhorses of my layout will be a Canadian Pacific Railway S-2 Alco switcher Number 7020. This is a model of a locomotive which is preserved at the Toronto Railway Museum. She spent her entire working life in Toronto switching for the CPR. As I’d written about previously, I’m modelling her in her 2nd paint scheme, an overall maroon with yellow bars and trim.

CPR S-2 #7020 being tested on my layout. Still have to apply decals to the number boards and then weather.

Today I flat coated the locomotive to take off the shine and seal the decals for weathering. It already looks lightyears better being dull, and will get some heavy weathering to reflect the paint scheme being tired and near replacement in my mid-late 1950’s era.

First test pull of cars from the staging tail tracks onto the traverser.

I’m still using a loaner DCC system (and even if I had bought mine, I haven’t wired any of the layout yet!), but that was enough for me to put 7020 on the track, and check that she moved forward and back, and was able to pull some cars onto the staging transfer table. Successful test, as you can see in the video above. 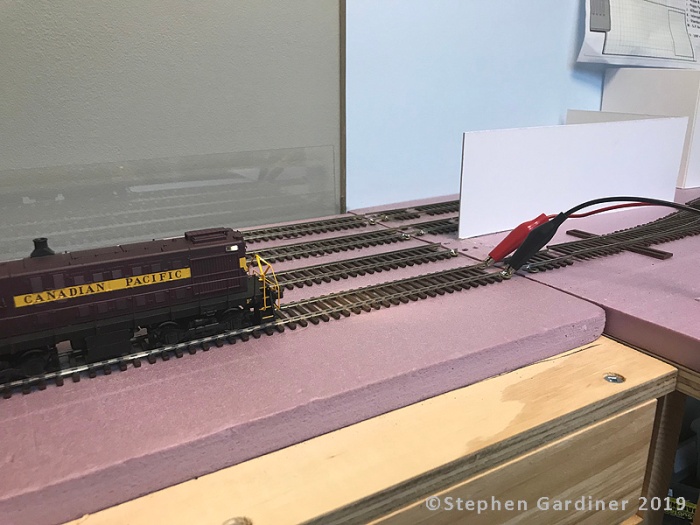 Temporary wiring hookup to power a single track on the transfer table.

Once I’ve finished the numberboards, I’ll probably set up the good camera for some beauty shots before weathering is applied, but that’s another days task as a productive holiday Monday of layout puttering comes to an end for me!

I’ve started laying track on the layout, starting with the “west” staging that is the Canadian National Railway staging, representing the Dufferin Yard where Exhibition Station now stands. The way the layout is set up, I have to mirror what I’ve done for the “east” Canadian Pacific Railway staging representing Parkdale Yard. My original plan was to build in the closet first so I could make mistakes where they would be more out of sight. Over time, I decided that it made more sense to start in the main room, because I’d have room to work and see what I was doing so that when I’m working in the more constructed closet, I’d already know what I was doing.

Scenes from Tracklaying, using a heritage brick from the Don Valley Brickworks as a weight to hold track down while the silicone caulk sets to hold the track in place.

Once all four tracks were laid, I cut the gaps in the rails so that the transfer table could slide. I did this with my dremel tool and a flex shaft attachment so I could get in close and control my cutting. I don’t have any pictures as it’s hard to take pictures of yourself doing this. Once the gaps were cut, I slid the table, and noticed my first mistake. I had the table pushed in too far. the drawer slides have a point where they stop resting on the hard stop, and to close them the last 1/8″ or so you have to push hard. I’d intended to not use this as it could cause rolling stock to fall over off the rails, but I’d failed to check where everything was sitting before laying the tracks.

Cutting rail gaps, its hard to take pictures of yourself with a demel tool cutting gaps.

After some frustrated looking at it, I realized I could easily move all the pieces of track not on the transfer table to fix the alignment. It took maybe 45 minutes including the time needed for the new silicone caulk being used as glue to set and hold the track in place.

Realigned tails and then laying the balance of the track in staging.

Getting everything lined up meant I could spend some time rolling equipment on and off, and looking for places where there were misalignments or issues. I found and fixed a few, I expect when I get closer to full operations, I’ll need to come back and file some rails a bit to provide a bit of alignment give, but overall I’m happy with it at this point, as I can now look at getting started with wiring it up so I can actually run powered tests across it so see how things work.

Video of a first test of the staging, before I installed a safety shield at the back to make sure equipment couldn’t take the fast way to the floor off the back side!

Friday I was able to go to my local plastics supply store and buy some pieces of 1/8″ acrylic sheet cut to the sizes I need for the spaces I need to have a safety guard for now. There may be a few other areas that need to be guarded once the layout gets closer to completion, but for now, its mostly around the staging transfers when I get them done. The clear safety screen is now in place. I’ll need to run a bead of caulk between the foam and the acrylic as there’s a bit of a gap and a little bit of caulk can keep that from becoming a dust mess full of bits of construction debris. 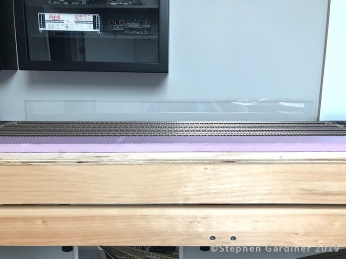 Acrylic safety shield on the back to make sure equipment doesn’t take the fast way to the floor off the back track.

The final task I did today was install a kitchen cabinet handle so there is an easy way for operators to move the transfer table. Eventually I’ll add a skin of black styrene or ABS to make the facade of the layout look presentable, but that’s a well down the road task.

Installing a Kitchen Cabinet Handle for the transfer table to make it east to shift and align.

At the end of the day, I’ve now laid a touch over 17 feet of track, though it only covers about 4.5 feet of benchwork length with the four staging tracks on one end. Its nice to see some track in place at the 11 month mark from when we closed on our house and moved.