Saturday this weekend I got together with my friends Ryan Mendell and Trevor Marshall at Ryan’s house. He was coming to my end of the City in the morning to go shopping at Sculpture Supply Canada, a store that specializes in casting and model making supplies. I suspect most of their business is costume makers and the like, but it’s a handy place for model railroaders too. Ryan has recently started his own business selling freight car kits and tools that he’s designed at National Scale Car, so he’s going through resin casting supplies making molds and producing parts for his kits. When he said he was going to be in my end of town, and he then offered a get together at his place with Trevor who wanted to work on some of his projects using Ryan’s fantastic workshop (I’ll send you to Trevor’s blog to here his tales), I jumped at the chance. I packed up a kit for the layout I hadn’t started, and off we went. After stops at Sculpture Supply and Wheels and Wings Hobbies, we made it to Ryan’s. 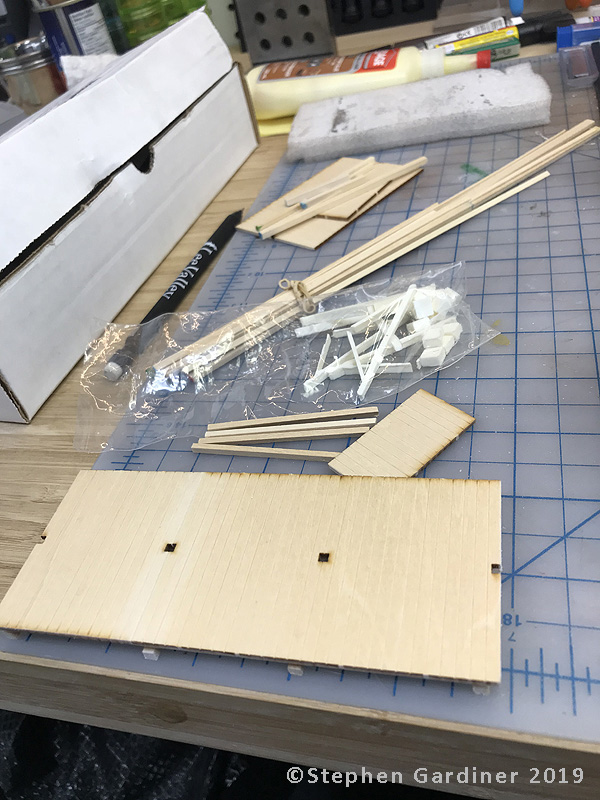 The Kanamodel CNR Freight Shed kit in progress. I’m using it for a loading dock shed on Pardee Avenue, as its close enough and saves me building something from scratch. I’m building it about 3″ shorter than the kits normal size to fit the space it has.

The kit I brought is from a company called Kanamodel, which sadly went out of business around 2017 when the owner passed away. I’ve built a couple of their kits before, and was generally happy with them, but the resin parts in the kit that form the roof supports on the top of a wooden post were in a word, abject. Of the six in the kit, one was passably decent, three were usable, and two were garbage. Fortunately, I only need four, but Ryan suggested this would be a good project to make a mold of and cast some new ones as a way for me to dip a toe into resin casting. For the buildings of Liberty Village, in the long run it will be easier for me to 3D print the masters for the windows, and cast them from resin. They’ll be cheaper in the long run, and if I break a window, a new one is only a few minutes away, which avoids the problem I learned on my model of Bar Volo, if you 3D print, and you have no spares, you’re a bit screwed if you break any!! 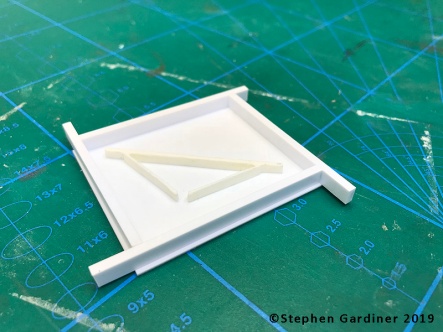 Making my first mold box with the one decent roof truss in the kit.

I have always found the notion of casting parts to be daunting, I think some of that was you first have to build a good model to use as your master for making the mold. Now that’s easier for me with 3D printing, but having never seen any of it done, I didn’t really understand the process. This process applies to flat or 2D items, anything that is detailed all around is a different process making a multipart mold box. For what I was doing, glue the part down to a styrene base, then build the mold box walls to hold in the rubber around it. A quick spray with a mold release, and then the two part rubber can be poured in. Bang the mold on the table to get air bubbles to rise out, give it a couple of minutes, put on a piece of wax paper, and slide a block of glass/acrylic across to squeeze out any excess rubber and create a flat base. Put on some weights, and then let it sit for a bit (the length depends on the rubber being used). Once its cured, it pops right out. a little bit of cleaning, and then its on to making resin and casting. 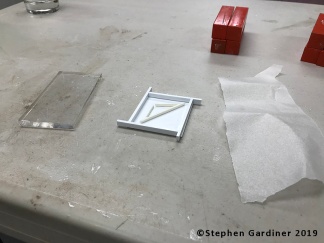 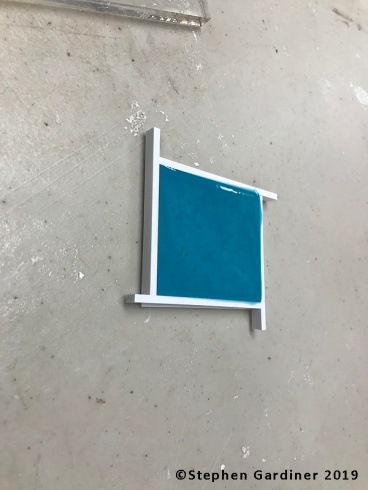 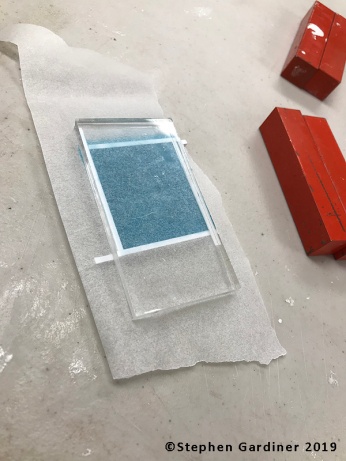 The stages of making a rubber mold. The two part mix, the box ready for the rubber, the mold filled with rubber, smoothing out the mold (this side will be the bottom when casting, and needs to be flat so the part fills with resin), and weighting it down while the rubber cures.

Similar to the mold material, the resin is a 2 part product, you mix them together, and once that’s done, you have a “pot life” and a “cure time”. The pot life is how long it is liquid and can be poured to try and get it into the mold. For what Ryan was using, it was 3 minutes. Then you wait, the advertised cure time was 10 minutes, but his basement was a bit cool and it took closer to 20 minutes. But when done, out popped a replacement part, with all the imperfections of the original perfectly replicated. 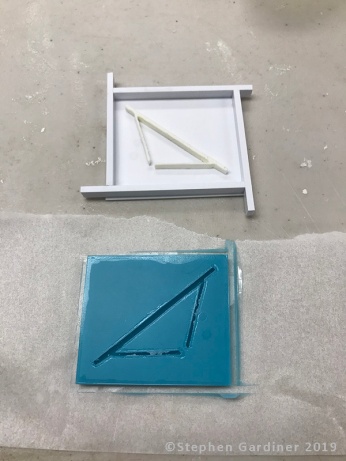 The mold out of the box to make it, and the first casting of a new roof truss.

Because we were getting late in the day, and Trevor and I both had to leave, I wasn’t able to cast the four parts I needed, but we cleaned up our various messes in Ryan’s workshop, and Ryan said he’ll cast me a few more of the parts for the next time we see each other. It was a great learning experience, and I think I understand the basic process well enough now to pick up supplies, and try it on my own in the future.