Well that was a productive Saturday afternoon and evening. The layout room cleanup this week paid off nicely. Four friends joined me, Mark, Dan, Trevor and James. This was great as Mark and James had never seen the layout room, so it was their introduction, while Dan and Trevor (See Trevor’s post on the day here) have been regular visitors and helpers in construction. It also proved that the biggest number of guests that can reasonably be accommodated is 3! Five people in the room with the layout and tools going is too many to manoeuvre at times. 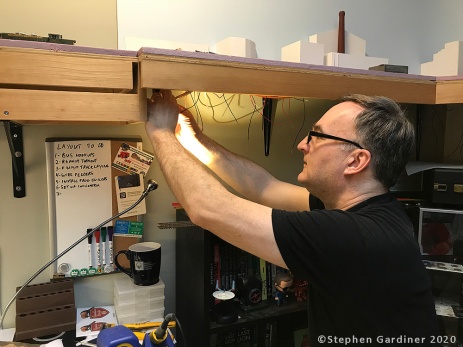 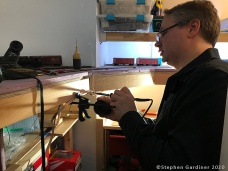 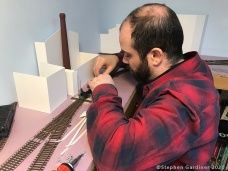 Mark, Trevor and Dan working, and a sort of group shot of Mark, Dan, James and the back of my head discussing what we are doing!

We started the day by starting to make the wiring connections from the individual track feeders to the DCC power bus along the sceniced part of the layout, the connections in staging were previously made. Mark started from one end of the layout, and Trevor from the other. Dan was prepping to replace a switch throw bar that we broke on our big tracklaying day last year, and I was learning and asking lots of questions of Trevor and Mark to understand their slightly different, but equally effective techniques for making the connections from the track feeders to the bus wire. I now know two different techniques for it, and can work on finishing the job myself in the coming weeks.

Splitting the bus wire, in this case 14 gauge speaker wire, and then connecting the track feeders into the bus.

While we were upstairs working, my wife Heather decided to bake some cookies for us. Last week after baking some cookies for herself and for me to bring to a friends layout operating session, she announced that she was taking a break from baking after the holidays and doing a lot of it. I’m happy that break only lasted a week! If you like good food, you should check out her blog, its in the sidebar and linked here!

Gandalf was not having it, too many train guys in his house. It stressed him out so he retired to the sofa downstairs to recover.

With the bus wiring started, and my understanding growing as how it is done to make good connections, we moved onto the final bit complex trackwork, the series of crossovers to access the peninsula on my layout. This area reflects the trackage from Liberty Street onto the spurs on/along Pardee Avenue. This is complicated trackage, as there are two spurs accessed from one direction, and one coming the opposite way, it means there are two crossings in close proximity, and all of this needed to be aligned so that the curves were navigable, and the crossovers didn’t sit on the split where the peninsula starts as it is designed to be swung away, and I don’t want this area to be any more unreliable than the risks movable benchwork already creates by the fact its designed to be moved.

Dan working on adjusting the switches and getting the trackage off of them installed. I’m honestly not sure what Trevor is doing other than proving you cannot fit in my layout room while standing on a three step ladder (the higher ceiling area is the skylight vault in the middle of the room).

After a few hours of hard work wiring and figuring out the final track geometry, it was time for some dinner (the least I can do is feed my friends to thank them for helping build my layout, it isn’t nearly enough, but its a start!). I ordered a couple of pizzas from our local place here in Etobicoke, Milano’s Pizza, and despite the consensus from my friends that Pineapple has a place on pizza (pro tip, it does not), we never the less ordered a Hawaiian pizza for the crew along with a more traditional one and some mozzarella sticks. After a relaxing dinner break, Mark headed for home before the roads turned to ice (Toronto set a January rainfall record while we worked, better than a snowfall record I guess since people travelled from across the City to get here), while Dan, Trevor and I headed back upstairs to finish the trackwork they had started. 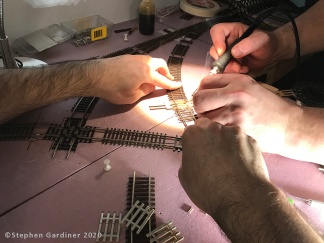 After dinner Dan and Trevor figure out how to complete the “baby Bat’leth” of trackage onto the peninsula, building it in place to get the curves right.

We got the track alignment and curvatures sorted out eventually. We wound up using a pair of the four-tie long “Gapmasters” from American Tie and Timber that I bought for each of the crossings to hold the trackage in place. We figured that would give better support since the tracks cross the gap at an angle for when I make the cuts to allow the peninsula to be swung into its stored position. 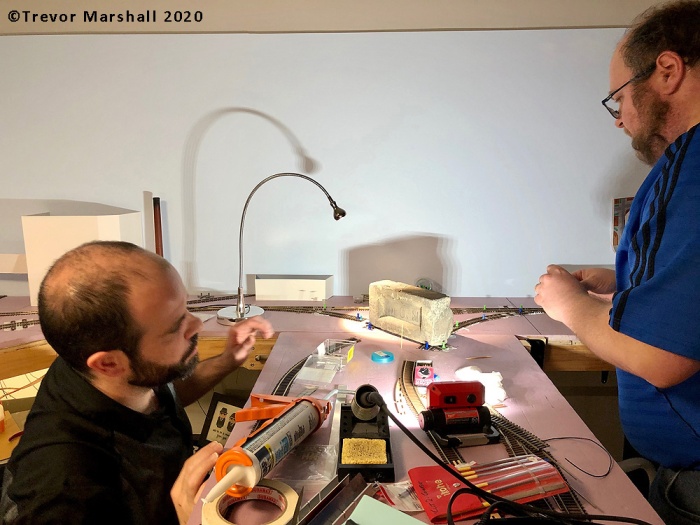 Dan and myself working on the last crossing of the peninsula. The heritage brick is doing yeoman’s work at holding track down while the Alex Caulk dries.

With that, tracklaying is almost done. After the gang got packed up, I spent a bit of time cleaning up the room of little bits of wire cover and sawdust so Gandalf wouldn’t get at it, and started to plan out my next steps. There is a bit of soldering cleanup on some of the bus connections that were started and not finished, and a real chance that I can finish track laying this afternoon (after a nice lazy morning watching proper football and drinking tea. Trains can happen during with the NFL games as background later). There is one switch and three sidings on the peninsula to go, then my final piece gap between the two ends of the layout. 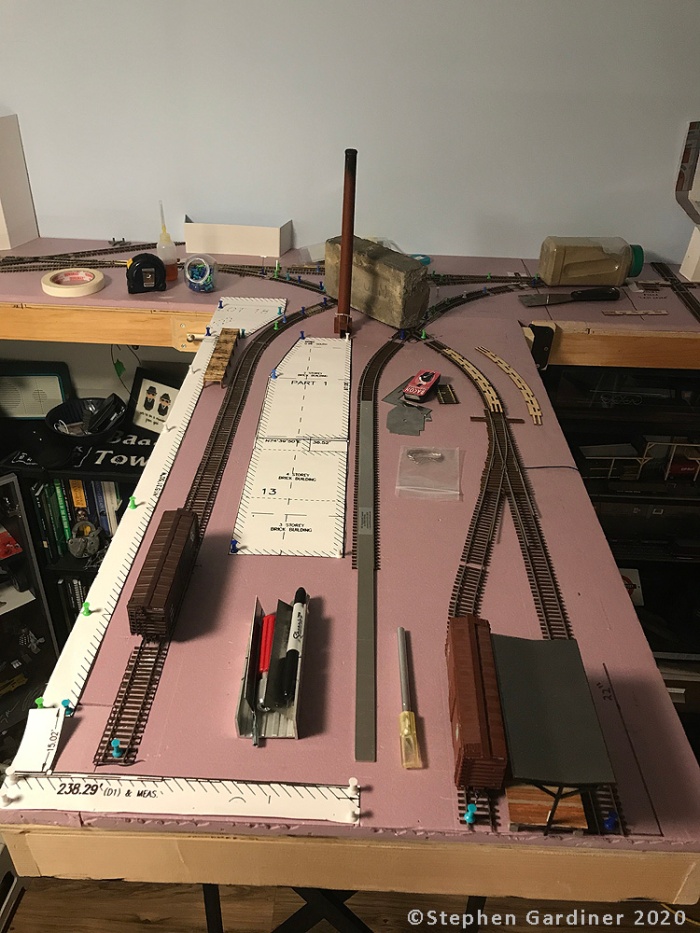 End of the day, the peninsula looking mighty fine and progressing towards completion.