Skip to content
HomeA gondola box and Finishing a Flatcar

As I’ve decided to build a small auxiliary train, with a crane, boom car and service car, I decided to turn the 40′ Tichy flat car kit I’m building as part of this, as there isn’t really an industry on the layout that used flat cars. 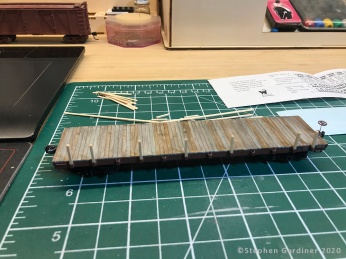 Building a box for the deck of the flatcar. Using the stake pockets in the car to support it.

To build the box, I dove into my strip wood drawer, and found appropriate sized pieces of scale lumber. 4×4’s for the supports, to be inserted into the stake pockets, and 2×6’s for the side panels. The box is a simple rectangle. I built it in place with the stake pocket supports, I wasn’t going for super accuracy, but a home built look as this would have been built by shop staff as needed. 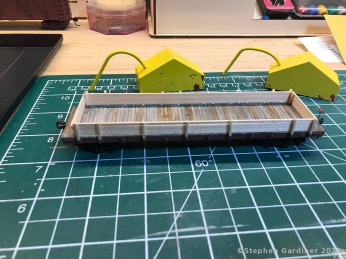 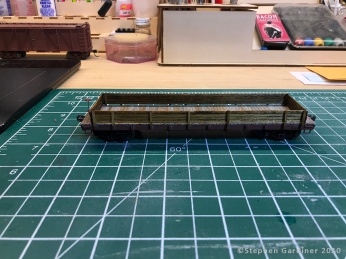 Finished box, then staining and weathering the wood before painting the outside boxcar red to match the flat car. 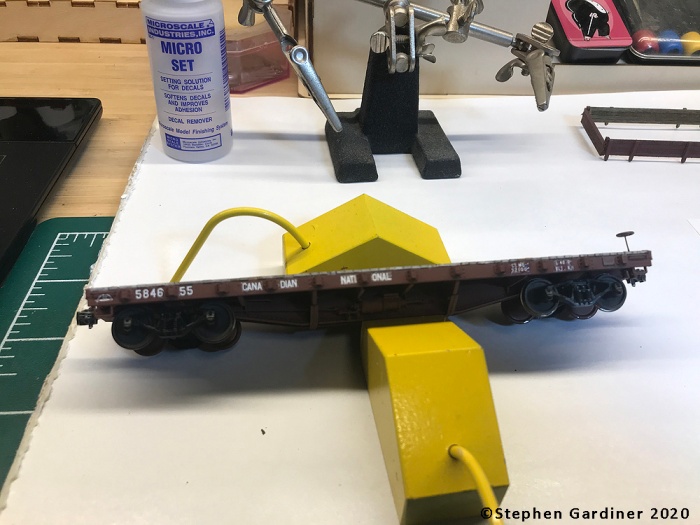 Decals for the flat car, using a random number in the series CNR service cars seemed to be in.

I weathered the box with a commercial stain, then a mix of Isopropyl Alcohol and India Ink I keep around for darkening and making things look grungy. I had decals for Canadian National Flat Cars from Black Cat Publishing. The set provides a range of decals for cars in different eras. I don’t have a specific prototype for this car, so I just made up a number in the range of CN Work Train cars from pictures I’ve found. 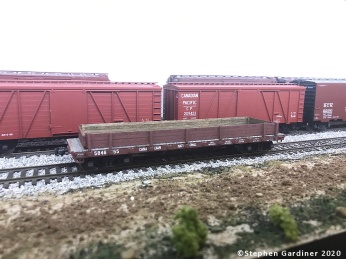 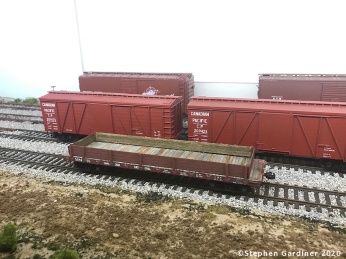 Finished build on the layout, just need to give it a dullcote then move onto weathering.

I’m quite happy with this car, for an older kit, the Tichy kit is really well designed and engineered. I’m going to weather this car more, but want to do all the cars in the auxiliary train together so they resemble cars that have been working together. For now, its another car down on the pile on the workbench to eventually have enough cars to operate the layout.

2 thoughts on “A gondola box and Finishing a Flatcar”