Another year in the books, and another good one. Obviously, much of my progress has been on the layout, not always obvious or big steps, but slow and steady. It’s also however, been a year where I got the opportunity to operate on multiple other peoples layouts, and help construct someone else’s layout as well. All opportunities I didn’t have before making friends through the online community in Toronto.

View of the layout on December 31st showing the state at the end of 2019.

A summary of my year is below, followed by some brief thoughts on things:

Strangely, none of those have anything at all to do with or on a layout set in Liberty Village in the 1950’s.

So, with that high level summary of the “plan” (insofar as one can plan a hobby), a bit of a chat on what I did is below:

Didn’t finish a lot, because this was a year of progress on layout building, but I did finish two locomotives, an unpowered VIA Rail P42 in the Canada 150 scheme and a CPR S-2for the layout. I also “Finished” the benchwork main construction. There is plenty of work to do on finishing and working on it, but all of the required benchwork is built now with the peninsula in place, a big milestone for the layout. 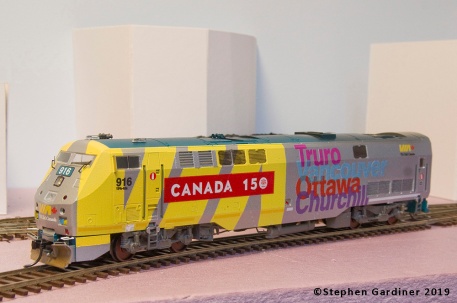 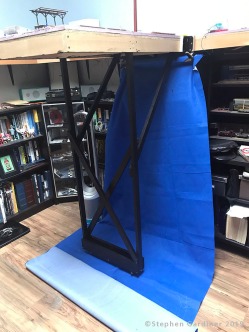 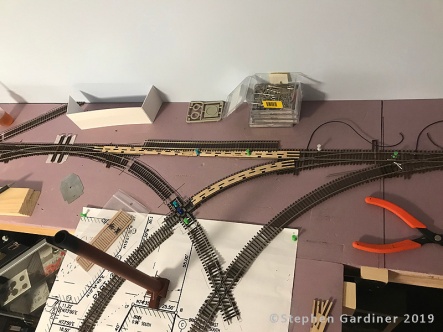 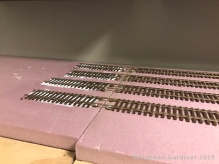 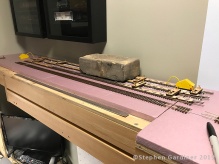 Lets be honest, the project in progress is the layout. There are so many different things being worked on, all in the interests of being able to start running trains and testing. There has been track laying, wiring, building switch machines, painting, installing lighting, building benchwork, and so much more. Other projects that are on the go are all kinda pale in comparison to the work list on the layout and continuing to advance that.

I’ve also been working on one solitary “That’s No Train” project in a plastic race car model kit. I’ll post about it sometime. It just kinda sits on the workbench and gets worked on from time to time as a alternative to tracklaying and wiring and layout building. I’m semi targeting having it done by July to take to Mosport, but that may or may not happen. 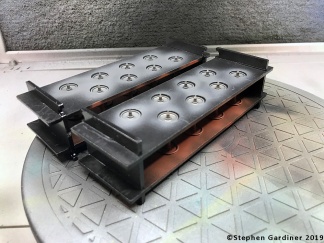 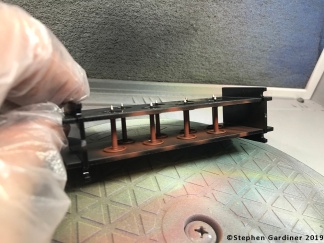 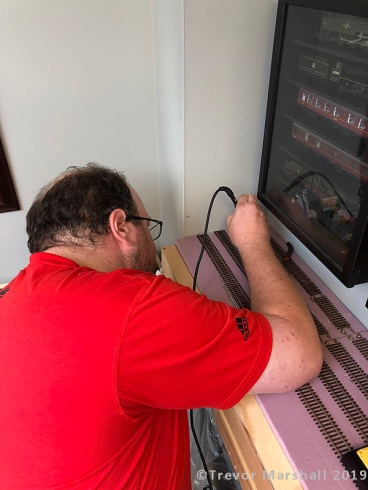 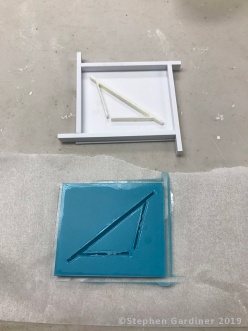 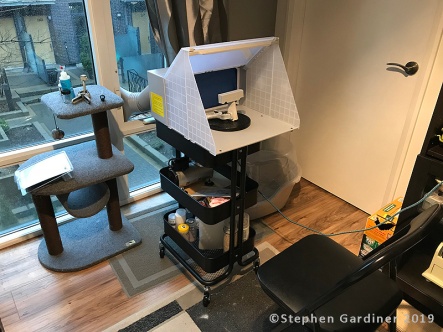 A collection of things being learned or improved upon in my skills toolbox from 2019.

This is something that is ongoing, and hopefully always will be. I was able to learn and apply a lot of new and improved skills this year. I’m better at using my airbrush, at soldering, at building kits and woodworking. I started down the road of learning to cast parts in resin. As I get closer to building my buildings, I’ll need to continue to learn and start to apply those skills. Part of the joy of this hobby is the journey, both on my own and with friends.

A Decade in Trains

As a closing thought, since everyone is on about it being the end of the decade, its been quite the decade for me in our hobby. A decade ago, my layout was a poorly designed shelf in my parents basement, a house I hadn’t lived in for 5 years at that point, and I was just barely in the hobby. A decade on, I’ve pushed myself, made friends in the hobby (something I had very few of in 2010), and now am building a layout in my own house. Its been a crazy 10 years. Hopefully in 10 I can be reflecting on at least a couple of years of operating and refining Liberty Village! 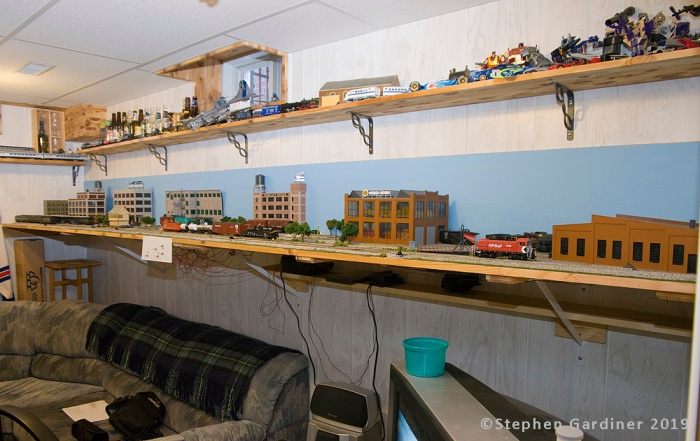 Georgetown in January 2010, almost everything on this layout is gone now save a few pieces of rolling stock. It’s been a crazy decade in the hobby!

So, that’s about it. I’ve tried to keep this years year in review short and sweet, not because it hasn’t been a good year, but because it’s just easier to be short and sweet to collect things and link back to stuff I’ve already written. With that, all the best to you and yours, have a wonderful New Years Eve, and happy modelling in 2020!! 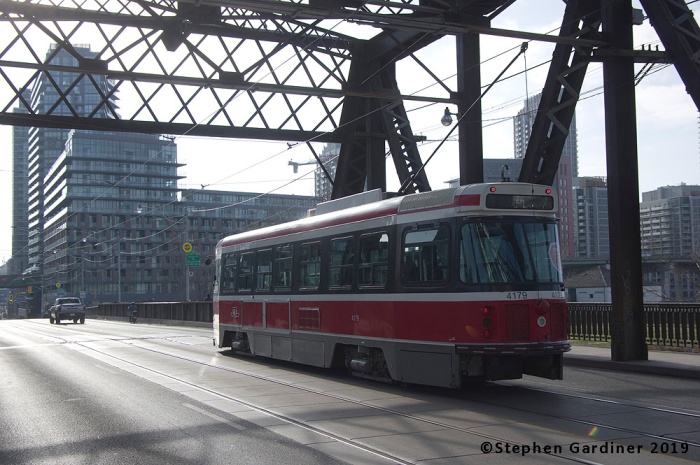 The End. My last shot of a CLRV in service on the streets of Toronto. The end for an Icon in the City.

The end. By the time this Tuesday Train arrives, the Canadian Light Rail Vehicle, or CLRV will be history on the streets of Toronto. As 2019 comes to an end, their long swansong as the delays in delivery of their replacement have finally come to an end, and they along with their already gone bigger brothers the Advanced Light Rail Vehicle (ALRV) which was gone earlier this year, Toronto’s streetcar fleet will now be fully modernized. The new cars are better in many ways, not least of which they are fully accessible and far more reliable, and no doubt they will grow on me, but they lack something in their being a modified generic design used around the world. The CLRV and ALRV were streetcars when I first came to Toronto as a kid and saw them, and when I moved here after university to make it my home. Yes, they’ll be around for special events, and at museums, but it’s not the same as them being in service. The picture gallery below shows my pictures from December 28th, 2019, the last day of regular service. The last day of any service was December 29th, when special free runs were being made along the 501 Queen Street route. Goodbye old friend, till we meet again at the museum! 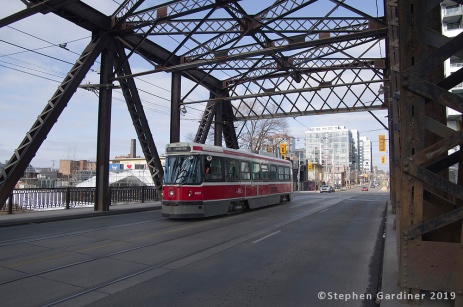 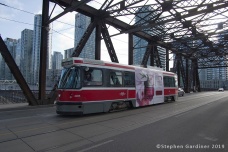 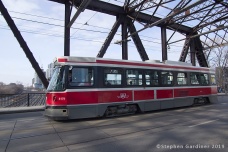 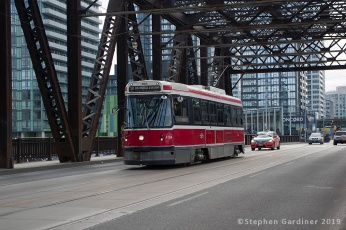 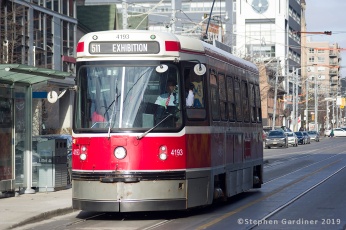 A full set of pictures from the hour I spent out photographing the cars is at the following link.

Sampling of shots from the Flickr set of December 28th photos.

A couple of months ago I ordered a new desk tool organizer. When it arrived, I was mostly happy with it, aside from a couple of lazy/sloppy design “features”. The main one was that the tool organizer was a thin piece of laser cut wood, but there was no lower organizer to keep tools upright or in the slot, things just flopped about. This to me defeats the purpose, so today I visited one of my off-site workshops that has a drill press to quickly make an insert piece to provide some hold for tools put in the slots. 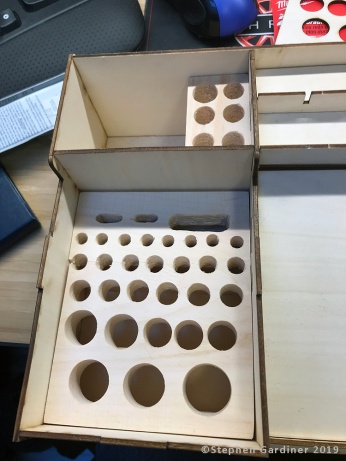 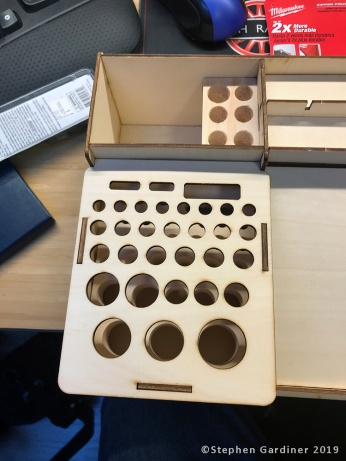 My drilled out wood block in place, with spacers beneath to raise it from the bottom of the tool organizer, and the laser cut top piece back in place.

With the new piece in place, tools actually stand up in their hole, and the organizer becomes useful. I’m still working on which tools I want where, and what all i’m going to keep in this long term, but it brings me closer to one of my 2019 goals of improving my workbench organization a bit. 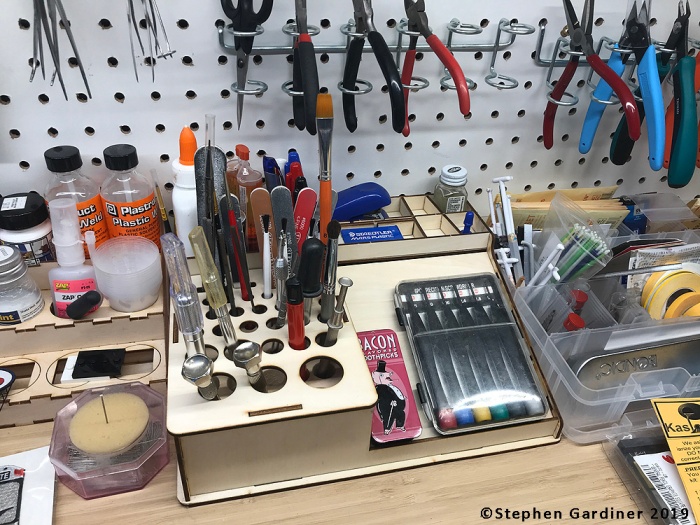 Boxing Day, the day after Christmas, for some a day of copious consumption, for others, another day of rest. I can’t be bothered to go fight the hordes at the stores, there is nothing I need that badly that can’t wait or be bought at regular price!

So with that, I’m watching English Premier League soccer (oh Newcastle..this is not going well) and ticking off a small but necessary to do project. I’ve painted the legs for the peninsula of the layout. Up to now they had been unpainted pine. Now that I am happy with them, a coat of satin black paint has been applied to help them blend away. I will at some point make a fabric cover for underneath to hide wiring and switch machines and the like, and add a fascia around the benchwork, but painting the legs has definitely give a bit of a more “finished” look to the peninsula. 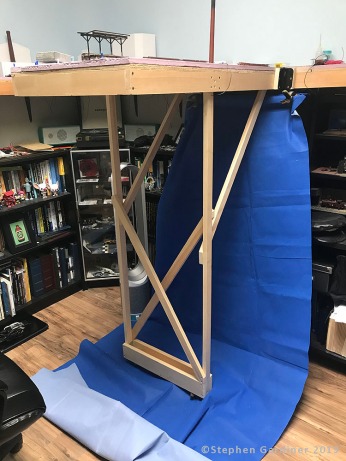 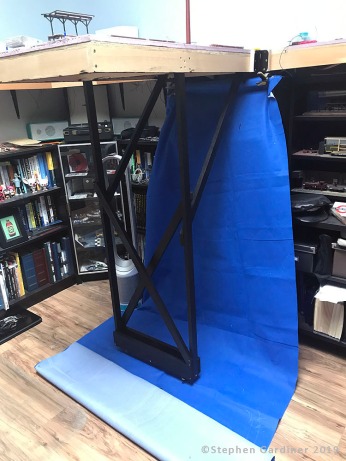 Before and after, a simple coat of black paint really helps the legs disappear and look more finished.

Now to get on with the trackwork on the peninsula so I can actually swing it out of the way and stop banging my head and back into it navigating around it! 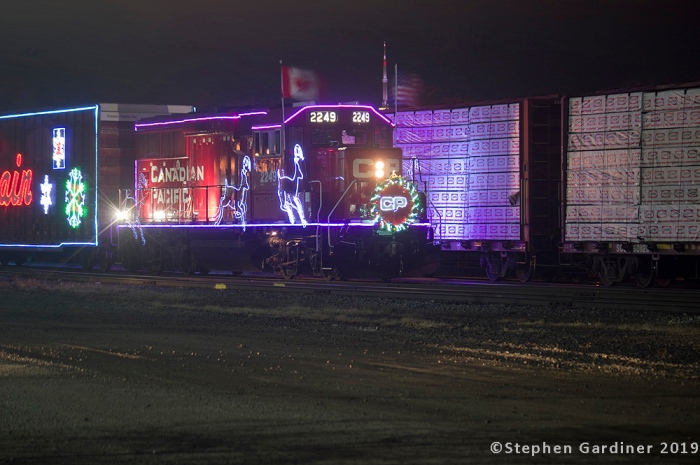 Happy Holidays, Merry Christmas!! The Canadian Pacific Railway’s Holiday Train makes its annual run across Canada and the US in support of local food banks. It is seen here at the Toronto stop at Lambton Yard with the CN Tower in the background. 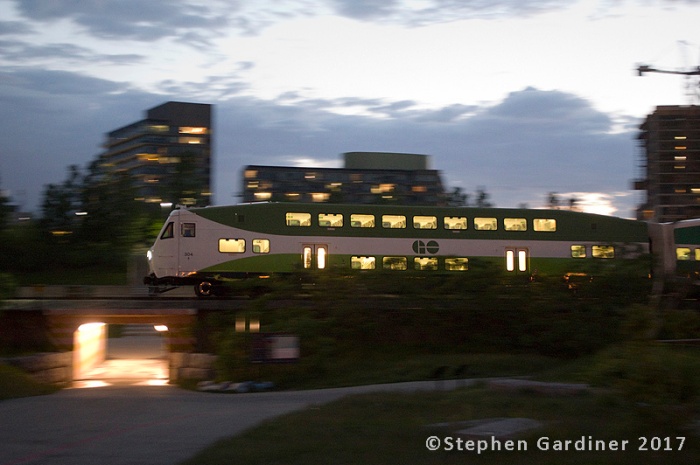 GO in the Dark. A panning shot of an empty southbound stock movement of a GO Train coming from the Richmond Hill line back onto the Union Station corridor at Corktown Common Park.